Southwest Airlines shares gained 0.6% on Friday, upon the release of the carrier’s Feb-2010 traffic results.

Southwest stated weather-related flight cancellations during the month reduced passenger revenues by an estimated USD15 million. Comparatively, Continental and US Airways have estimated losses of USD25 million and USD30 million, respectively, due to the February storms, which caused airlines to cancel thousands of flights and resulted in delays to many others. According to FlightStats.com, Southwest cancelled more flights than any other airline in the month, at 3,687 services.

However, the LCC’s passenger revenue per ASM (PRASM) is estimated to have increased in the 16-17% range in the month (although these results were partially a result of the cancelled services). Southwest has reported strong growth in unit revenue since Sep-2009, with Feb-2010’s PRASM levels the highest since Southwest emerged from PRASM declines in Aug-2009.

Also in the month, Southwest handled 5.9 million revenue passengers, a 2.9% year-on-year reduction, as traffic (RPKs) decreased 2.3%. The traffic reduction represents the first fall since Jun-2010. However, load factors gained 4.8 ppts, to 73.9%, for a new February record and for the eight consecutive months of record load factors. Capacity (ASMs) in the month was down 8.7%.

Meanwhile, Fitch Ratings affirmed the Issuer Default Rating (IDR) for JetBlue Airways at 'B-' and the senior unsecured rating, which applies to approximately USD470 million of convertible notes, at 'CC' with a Recovery Rating of 'RR6'. The airline's rating outlook has been revised from 'Negative' to 'Stable'. JetBlue’s shares slipped 0.2% on Friday.

Fitch stated the affirmation of JBLU's ratings and the outlook revision reflect its view that the airline is in a “good position to deliver improved operating results and a second consecutive year of positive free cash flow (FCF) as the economy recovers in 2010”.

Fitch added that it expects JetBlue to report “material gains in RASM in 2010 as the economic recovery drives a significant pick-up in traffic, while slow industry capacity growth and reduced fare sale activity boosts yields”. In light of this, Fitch believes that full-year 2010 RASM growth in the mid-single digit percentage range is achievable.

Allegiant's shares slipped 0.2% yesterday, as the carrier signed a forward purchase agreement to acquire six B757-200 aircraft, signalling a change from a single-aircraft fleet of MD-80s. The introduction of the B757 aircraft will enable Allegiant to expand its leisure travel strategy into Hawaii, a market which it cannot serve with MD-80s. Allegiant plans to take delivery of the aircraft and place them in service on the following schedule:

GOL yields in accordance with projections

In Brazil, GOL stated yields averaged around BRL 19 cents (USD 10.68 cents) in Feb-2010, which was “very close” to January’s ratio and in accordance with its future prospects and projections. Also in the month, the Brazilian carrier reported a 14.2 ppt jump in average load factor (to 72.8%, with domestic load factor gaining 12.4 ppts to 72.4% and international load factor soaring 24.1 ppts to 74.9%). System capacity (ASKs) was up 18.2%, driven by a 22.6% increase in domestic capacity. 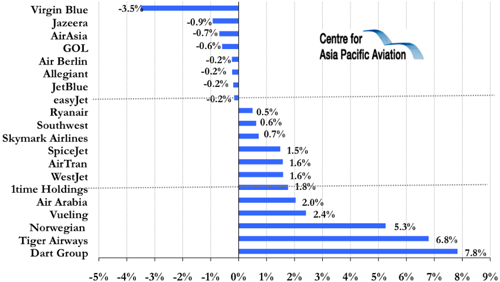