Southwest Airlines’ shares slipped 1.0% yesterday coinciding with the release of the carrier’s 1Q2010 financial results, in which the carrier reported a net profit of USD11 million in the quarter, a turnaround from a net loss of USD91 million in the previously corresponding period. The carrier was also profitable at the operating level, with a USD54 million operating profit, compared to a USD50 million loss in 1Q2009.

CEO, Gary E Kelly, commented, “to achieve this revenue performance in, seasonally, the weakest quarter, is notable. To do so in a recovering economic environment is truly remarkable”.  The carrier added that so far, strong load factor and yield trends have continued in Apr-2010, with the carrier anticipating another “significant” year-on-year unit revenue gain in 2Q1010.

Although the revenue and demand environment remained challenging in the final quarter of 2009, Virgin America reported strong revenue performance (revenue up 29% to USD153 million), “industry-leading” load factors (up 3.1 ppts to 84.3%) and improved unit costs (down 17.6% including fuel and 23.5% ex-fuel) for the fourth quarter. The airline narrowed its operating loss by USD11 million year-over-year in the quarter, to USD10.2 million, improving its operating margin by 10.9 ppts.

Also yesterday, shares in AirTran were up 0.9%. The carrier, on 21-Apr-2010, posted a loss of USD12 million in 1Q2010, a substantial swing from the year-ago period when it earned USD28.7 million. AirTran benefited from USD4.7 million in unrealised gains on future fuel hedges, without which it would have had a net loss of USD16.7 million. See related article: AirTran posts loss, won’t initiate merger 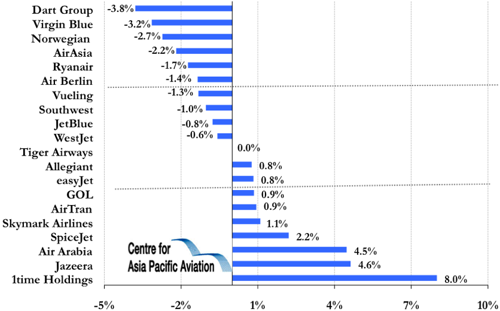