The AMEX Airline Index was up 2.1% on Thursday (08-Oct-09), with the majority of North and South American carriers’ stocks inching upwards.

Stocks were assist by gains in the broader market, with the Dow making a modest gain, up 0.6%. The rise in airline stocks came despite a 3.1% jump in oil prices, to USD71.69.

Southwest (+5.7%) led the gains yesterday, after Jesup & Lamont raised its 3Q2009 forecast for the carrier from a loss of USD0.08 per share to a profit of USD0.02 per share. For the full year, its EPS estimate, excluding extraordinary items, is for a profit of USD0.12 per share.

For 2010, Jesup & Lamont’s preliminary estimate is for EPS of USD0.42 per share. According to the analysts, even using a multiple on earnings that is a premium to the group, "the shares seem expensive at current prices", and it maintained a “sell” rating on Southwest’s stock.

Delta up despite expected loss for 3Q2009

Delta Air Lines (+4.1%) was also up at the close of trade yesterday, despite a Dow Jones report noting analysts expect the carrier to post a USD0.07 per share loss on USD7.6 billion in revenue for 3Q2009. The consensus expectation comes after Delta stated in Sep-2009 that it does not expect to post a profit for FY2009. However, the carrier has built up solid capital reserves to weather the remainder of the year. 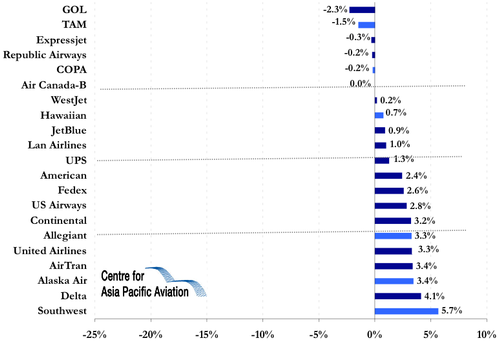