Southwest, the star performer in improving its unit revenues in recent months, continued to trump JetBlue, Continental Airlines and US Airways in this metric in Feb-2010, and was joined by United Airlines in reporting double-digit PRASM growth in the month.

Encouragingly, all the US carriers reporting monthly unit revenue figures registered growth in the month, with AirTran and Allegiant, which do not provide such updates, separately commenting of "improved" conditions in the market.

The lucrative business market, while recovering, is yet to return to pre-crisis levels, maintaining the pressure on the profitability and revenue outlook. The unit revenue figures were also inflated in the month, due to weather-related cancellations, which resulted in significant cancellations (and capacity reductions) across the US domestic network. See related article: Weather costs keep on mounting for US airlines

Southwest Airlines stated passenger revenue per ASM for Jan-2010 is estimated to have surged 16-17% in Feb-2010 - its largest PRASM increase in the past 12 months and the sixth consecutive month of PRASM growth for the carrier. The increase compares to a 2.0% PRASM reduction in Feb-2009. 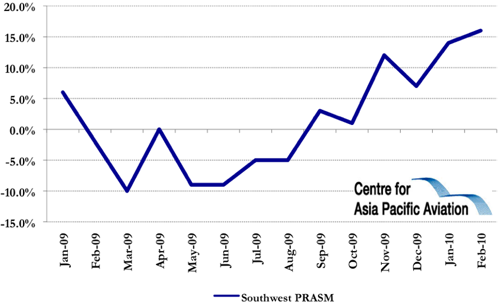 Looking forward, Southwest stated that with “strong revenue and booking trends continuing thus far into 2010, we expect another year-over-year increase in unit revenue for 1Q2010”.

JetBlue reported a 2% reduction in PRASM in Jan-2010 (off last year’s positive base of +13.1%), for its first month of PRASM improvements since Apr-2009. On a 12-month moving average, JetBlue’s PRASM finally showed signs of stabilisation last month. 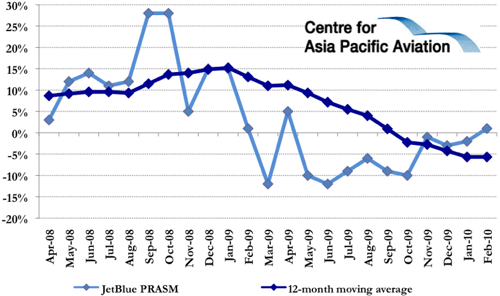 Looking ahead to 2010, JetBlue expects PRASM and RASM to be in the range of down 1-2% in 1Q2010, but some solid improvement thereafter. JetBlue is forecasting PRASM and RASM for the full year to increase in the +5-8% range.

Also among the LCCs, AirTran Airways (which does not provide monthly yield updates), at the Raymond James Institutional Investors Conference on 08-Mar-2010, commented that there is a "favourable industry backdrop going forward", with capacity remaining "disciplined" and yield trends "improving".

At the same conference, Allegiant Air added that it was expecting a 4% RASM improvement in Feb-2010, with a 2% increase in TRASM and a 7% upward movement in the total fare (like AirTran, Allegiant does not provide monthly yield/unit revenue updates).

Among the network carriers, United Airlines reported an estimated increase in consolidated passenger revenue per available seat mile (PRASM) of 17.0% to 19% in Feb-2010, for the third consecutive month of improvements and the largest year-on-year rise since prior to Jan-2008.

Consolidated PRASM is estimated to have increased by 3.8% to 5.8% from Feb-2010 levels, of which 2.0 ppts is attributable to growth in ancillary revenues. 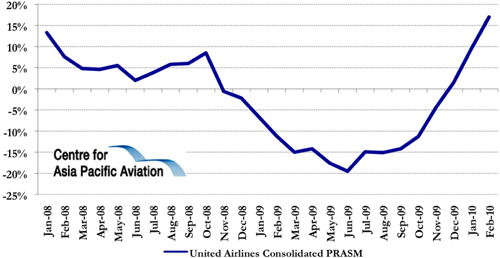 With two consecutive months of double-digit RASM, United Airlines is headed for its first quarter of positive RASM growth in over four quarters.

However, the carrier explained that the combination of capacity (ASMs) reductions caused by the two February snowstorms and the company's re-accommodation of passengers impacted by flight cancellations resulted in a year-on-year RASM benefit of approximately 1 ppts compared to normal levels. The Feb-2010 RASM growth also comes off a negative base in Feb-2009 (-11.5%). 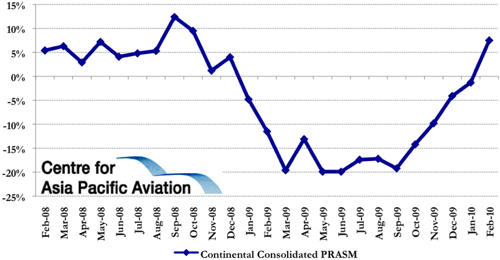 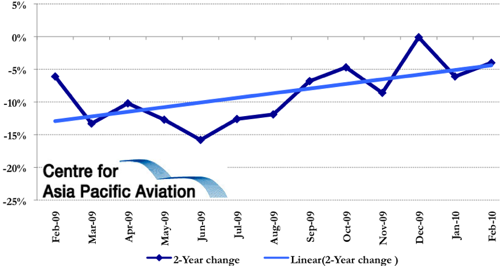 Mr Kirby added that the results indicate that the “revenue environment continues to show material signs of improvement with corporate booked revenue up more than 35% on a year-over-year basis." 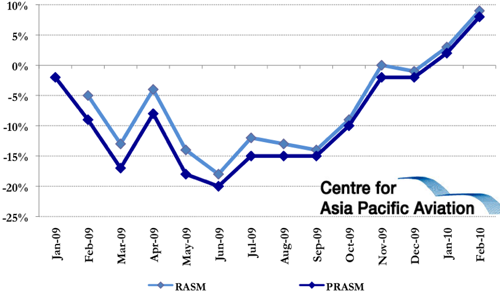 2009 was an extremely challenging year for US airlines, with passenger revenue declining 18% year-on-year in the full year, as a result of a 6% reduction in passenger volume and a 13% drop in the average price paid to fly one mile. The decline in passenger revenue from 2008 to 2009 was the largest on record, exceeding the 14% decline observed from 2000 to 2001. 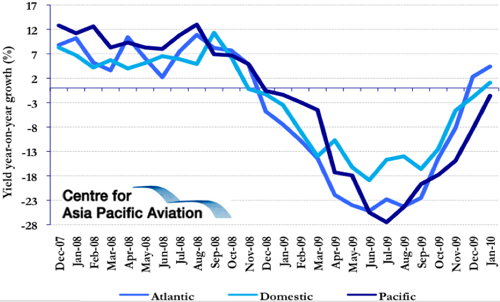 However, yields strengthened towards the end of 2009, with the Air Transport Association of America (ATA) reporting a 1.4% increase in passenger revenue in Jan-2010, reversing 14 consecutive months of declines. The average price to fly one mile also increased (up 0.6%), for the first such increase since Nov-2008. On a 12-month moving average, yields also appear to have stabilised in key markets. 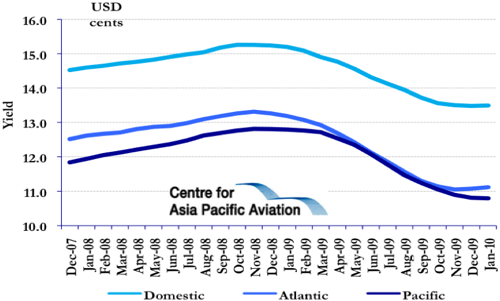 Meanwhile, all but two of the nine US majors (with the exception of American Airlines and JetBlue, which reported a marginal load factor reduction of 0.5 ppts and a stable load factor, respectively) reported load factor improvements in Feb-2010, reflecting continued capacity reductions. 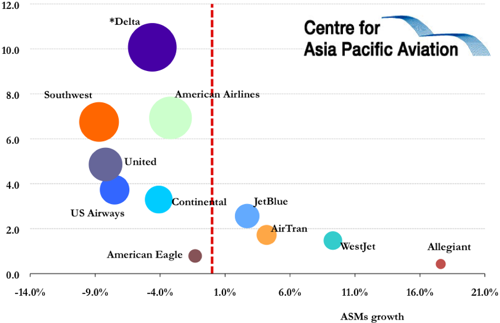 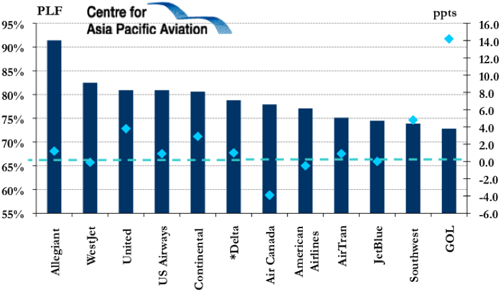 The outlook for 2010 is more optimistic, with ATA President and CEO, James C May, commenting that the “modest uptick in passenger revenue and the solid increase in cargo volumes are promising signs that air transport demand may be at the beginning of a long-awaited recovery”.  He previously commented that “anecdotal evidence suggests a positive revenue trajectory in 2010”.

However, while there is cause for optimism with signs that there exists positive revenue trajectory for the year ahead, as previously noted by ATA VP and Chief Economist, John Heimlich, it is “important to remember that ‘better than 2009 is not saying a whole lot’ in the grand scheme”.