Southwest Airlines (+1.9%) rose with North and South American airline stocks on Thursday (19-Nov-2010) ahead of the peak Thanksgiving holiday travel season. Southwest gained after its Board of Directors declared its 137th consecutive quarterly dividend of USD0.0045/share to shareholders of record on 09-Dec-2010 on all issued and outstanding shares. The dividend will be paid on 06-Jan-2011.

Also during trading, Southwest Airlines announced its flight attendants, represented by the Transport Workers Union (TWU) Local 556, voted to ratify a tentative agreement reached with the company in Sep-2010 to add the B737-800 to the current collective bargaining agreement.

Atlas Air (+4.6%) and Delta Air Lines (+4.2%) also moved higher for the day. During trading, Delta Air Lines received notification from the National Mediation Board (NMB) that a majority, more than 53%, of below-wing airport customer service (ACS) and cargo warehouse employees voting in the fleet service election rejected representation by the International Association of Machinists (IAM).

Delta employees continue voting in two remaining representation elections as a result of Delta's merger with the former Northwest Airlines. Results for stock clerks and supply attendant employees in Delta's Stores organisation will be announced on 22-Nov-2010. Results for reservation sales and customer-facing airport and cargo agents in the passenger service craft or class will be announced on 07-Dec-2010.

Elsewhere, Republic Airways (-0.3%) was the only carrier to end the session lower. 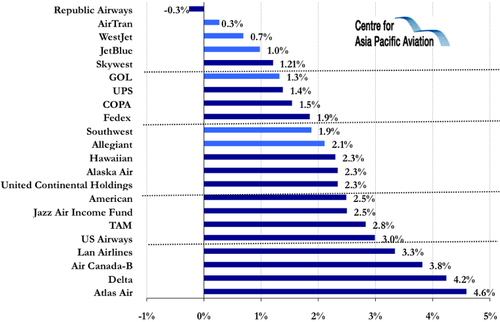