Southwest CEO warns of a “very difficult” months ahead; AirAsia 2Q2009 passengers up

Vueling (which formalised its merger with clickair on 09-Jul-09), Norwegian and Ryanair were the only major LCCs gaining on Tuesday, up 7.8%, 2.5% and 0.8%, respectively. Ryanair yesterday announced plans to reduce capacity at London Stansted in its Winter Schedule by 40%, equating to a fleet reduction of 16 aircraft (from 40 to 24 aircraft).

In the Asia Pacific, shares in AirAsia were down 1.6%. The LCC reported a 24% year-on-year increase in passenger numbers in the three months ended Jun-2009. Capacity increased by 25%, as it boosted its fleet and continued its route and frequency expansion strategy. AirAsia has quickly become Asia’s sixth largest airline by passenger numbers in the space of seven years, with the carrier expecting to become the second largest carrier in Asia by 2013, based on its current growth projections.

In the Americas, Southwest's shares slumped 5.9%, as CEO, Gary Kelly, stated the LCC could not guarantee another profit in 3Q2009, following its USD54 million net profit in 2Q2009. Key concerns for the carrier include continuing weakness in Business travel demand, yield and revenue weakness and rising fuel prices.

According to Mr Kelly, “I don't think the worst is behind us; I think the worst is ahead of us, and it's primarily because of increased energy costs at this stage”. He added that September is "typically the second-worst month of the year, which means it could be really bad ... With USD50 crude oil it's one thing, with USD70 crude oil in the third and fourth quarters and next year, those are very high energy prices in a recessionary environment and makes for a very difficult outlook." 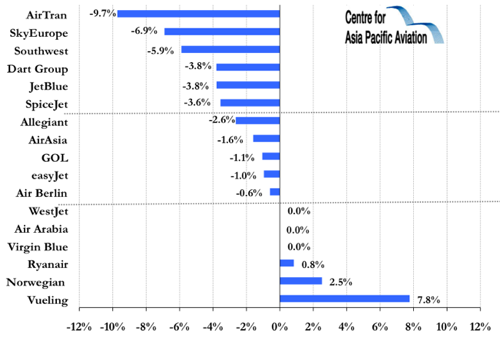