Southeast Asia’s low cost carrier fleet has passed the 600 aircraft mark as the region’s 23 LCCs added about 70 aircraft in 2015, resulting in 13% growth. The region’s LCC fleet has expanded by 50% in only three years, from 400 to just over 600 aircraft.

There was faster LCC capacity growth in medium/long haul markets connecting Southeast Asia with other regions, driven by a 37% expansion of the Southeast Asian LCC widebody fleet. There are now seven LCCs in Southeast Asia operating widebody aircraft, compared with only seven in the rest of the world.

Southeast Asia’s LCC fleet has grown by over 50% since the beginning of 2013, when it consisted of about 400 aircraft.

Notes: *Valuair included in Jetstar Asia figures for Jan-2013 and Jan-2014. Valuair was a Jetstar Asia subsidiary prior to being folded into Jetstar Asia in 2014.
^Cebgo was known as Tigerair Philippines until 2015. It was acquired by Cebu Pacific in 2014 and took over Cebu Pacific's turboprop fleet in 2015, while returning its A320s to Cebu Pacific. This resulted in a drop in the fleet size at Cebu Pacific, as Cebu Pacific had eight turboprops while Tigerair Philippines had four A320s.
#Fleet figures for all years combine Philippines AirAsia and Zest AirAsia. Zest was acquired by AirAsia in 2013 but operated under a separate AOC until late 2015.
Tigerair Mandala suspended operations in mid-2014
Source: CAPA - Centre for Aviation

Lion Group regional subsidiary Wings Air accounted for almost all the additional aircraft, expanding its ATR 72 fleet from 31 to 48 aircraft.

Thailand’s Nok Air also added two Bombardier Dash 8 Q400s as its turboprop fleet expanded from six to eight aircraft. Malindo Air, Cebgo and Golden Myanmar are the other turboprop operators in the Southeast Asia’s LCC sector, but none of these carriers added any turboprops in 2015.

The remaining 510 aircraft in Southeast Asia’s LCC fleet are narrowbody jets – a mix of 737 and A320 family aircraft. The narrowbody segment grew by a relatively modest 9% in 2015 but on a much larger base than the widebody or turboprop segments. There are currently 40 more narrowbody aircraft in service at Southeast Asian LCCs, compared with the situation one year ago.

As outlined above, Lion’s Indonesian regional subsidiary Wings Air added 17 ATR 72s, making it the fastest growing LCC in Southeast Asia, based on aircraft numbers. The rapid growth of the Lion Group fleet in 2015, including growth at full service subsidiary Batik Air, was analysed in a separate report published on 9-Jan-2016.

Other Southeast Asian short haul LCCs growing their narrowbody fleets in 2015 included Thai AirAsia with five aircraft, Citilink with four aircraft, and Jetstar Pacific with four aircraft. The fleet of AirAsia Group’s Malaysian subsidiary was flat, while the group’s affiliates in Indonesia and the Philippines shrank their fleets as part of turnaround efforts. Jetstar Asia and Tigerair also did not grow their fleets in 2016, as both responded to challenging conditions in Singapore’s short haul market.

Decisions to slow expansion, by the AirAsia Group and some of the region’s smaller players, led to a significant reduction in short haul LCC capacity growth in 2015. Within Southeast Asia LCC seat capacity was up by only about 9%, according to OAG data. Not surprisingly, this matches the 9% growth figure for Southeast Asia’s narrowbody fleet. 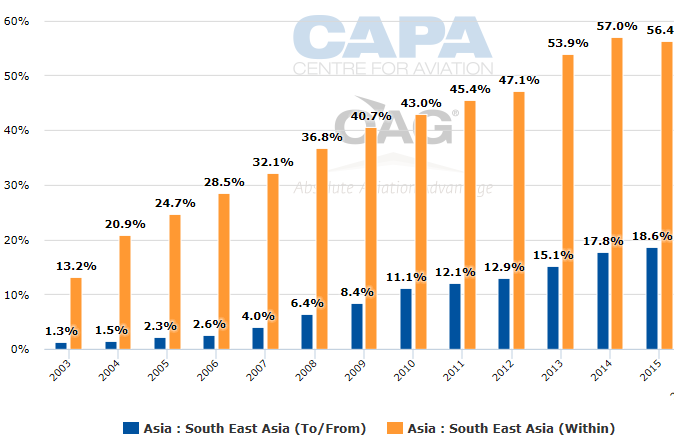 There are still opportunities for short haul LCC growth within Southeast Asia as the overall market continues to grow, boosted by economic growth and expansion of the region’s middle class population. Pioneer markets such as Myanmar and Vietnam, particularly, have a lot of potential.

That said, with the LCC penetration rate on short haul routes within the region already approaching 60% the market overall is now relatively mature. The extremely rapid growth rates from prior years, such as the 30% growth in LCC seats that was recorded in 2013, are simply no longer a realistic outcome.

The market began slowing down in 2014, with LCC capacity growth for the year at 14% within Southeast Asia. The 9% growth figure from 2015 represents a reasonable figure for the future.

CAPA projects 70 to 80 aircraft will be added to the Southeast Asian LCC fleet in 2016, resulting in a similar rate of fleet growth as in 2015. Once again, capacity in 2016 will grow much faster in markets connecting Southeast Asia with other regions, particularly North Asia, using a combination of widebody and narrowbody aircraft. There are still huge opportunities for growth in markets such as Southeast Asia-China, given the relatively low penetration rate and surging demand.

There will still be some opportunities for domestic and short haul international growth. Southeast Asian LCCs currently have over 1,100 aircraft on order, but inevitably a large portion of the aircraft on order will be used to replace the 600 aircraft currently in service, and to grow in medium haul markets that are still relatively underpenetrated.

Note: only includes LCC subsidiaries that are based in Southeast Asia. For example Batik is excluded from Lion Group and AirAsia India excluded from AirAsia Group.
Orders are based on location of the parent. For example, Jetstar orders are placed by its Australia-based parent and therefore are not included. All AirAsia orders are included as its parent is based in Southeast Asia, although some aircraft will end up at affiliates outside Southeast Asia.
Source: CAPA Fleet Database

Fewer than 100 of the 1,100 plus orders are for widebody aircraft. New generation narrowbody aircraft account for the majority of the orders.

The 737 MAX and A320neo families come with improved range and efficiency, enabling Southeast Asia’s LCC narrowbody operators to reach new markets outside the region and reduce their reliance on the relatively saturated short haul market.

The long term outlook for Southeast Asia’s LCC sector remains bright as long as the airline groups continue to make adjustments, avoid aggressive expansion in saturated markets, and direct growth to markets where there are better opportunities.