Southeast Asia low-cost airline fleet will grow by only 13% in 2015. Lion Air is the exception

Southeast Asia recorded a significant slowdown in LCC growth in 2014 as several airlines adjusted to challenging market conditions. The region’s LCC fleet expanded by 13% aircraft compared to about 20% growth in 2013.

A similar fleet growth rate of approximately 13% is likely in 2015, following further revisions to fleet plans in response to overcapacity, which has impacted most Southeast Asian short-haul markets since 2H2013. AirAsia in particular has slowed expansion and will take only five A320s in 2015 - although rival Lion Group is again not showing any signs of slowing and plans to take about 50 aircraft for the second consecutive year with over half ending up in the dynamic Southeast Asian LCC sector.

Growth rates could pick up again in 2016 or 2017 if market conditions improve. Higher growth rates ultimately will be required for Southeast Asia’s huge LCC order book, which consists of nearly 1,200 aircraft, to remain intact. The potentially huge impact of lower fuel prices could also reshape strategies in 2015, as some LCCs record a 20% reduction in total costs.

Southest Asia’s 21 LCCs ended 2014 with 536 aircraft (includes turboprops, narrowbodies and widebodies), according to the CAPA Fleet Database. This represents growth of about 60 aircraft or 13% compared to the beginning of 2014.

While still double digits there was a significant slowdown compared to 2013, when the fleet grew by about 20%.

Notes: *Valuair included in Jetstar Asia figures for 2012 and 2013. Valuair was a Jetstar Asia subsidiary prior to being folded into Jetstar Asia in 2014.
^Tigerair Philippines moved from the Tigerair Group to the Cebu Pacific Group in early 2014
#Zest was acquired by AirAsia in 2013. It was previously independent.
Source: CAPA - Centre for Aviation

Slower 2014 fleet growth driven by adjustments at AirAsia and Tigerair

At the beginning of 2014 the Southeast Asian LCC fleet was poised to grow in 2014 by slightly over 100 aircraft or about 22% to 580 aircraft. But the AirAsia and Tigerair groups made major adjustments in 1H2014, deferring A320 deliveries and subleasing or selling aircraft.

The Tigerair Group fleet in Southeast Asia dropped by 15 aircraft in 2014 as it closed its Indonesian affiliate and sold its Philippine affiliate to Cebu Pacific. As Tigerair suspended expansion in its original home market due to overcapacity in Singapore the aircraft that were overseas became excess and were grounded before eventually being subleased. (Note: Tigerair Australia and Tigerair Taiwan are excluded as this report focuses on the Southeast Asian market.)

The fleet at Cebu Pacific Air, which is the third largest LCC in Southeast Asia, ended flat at 48 aircraft. Cebu Pacific was initially planning to expand its fleet by four aircraft in 2015 but it ended up moving four of its aircraft to its new subsidiary, Tigerair Philippines. The five aircraft that were originally at Tigerair Philippines (which is expected to be rebranded in 2015) were returned to the Tigerair Group.

The AirAsia/AirAsia X fleet in Southeast Asia grew by about 15 aircraft as it deferred seven of the A320 deliveries which were originally slated for 2014. AirAsia was also hoping to sell 12 A320s during 2014 but ultimately was only able to sell one aircraft. (Note: AirAsia India, which began 2014 with three A320s, is also excluded as this report focuses on the Southeast Asian market.)

The Lion Group accounted for 27 or nearly half of the 60 aircraft added to the Southeast Asian LCC fleet in 2014. These figures exclude its full-service subsidiary Batik, which added more aircraft in 2014 than any of Lion Group’s LCC subsidiaries or affiliates, and aircraft placed outside the group by Transportation Partners.

Southeast Asian LCC fleet will grow by about another 13% in 2015, led by Lion

Lion Group carriers will again account for nearly half of the aircraft added to the Southeast Asian LCC fleet in 2015. The Lion Group plans to add about 50 aircraft in 2015 with an estimated 30 aircraft allocated to its four LCCs. The other 20 aircraft are projected to be used to further grow Batik or be leased out by Transportation Partners.

Overall CAPA projects Southeast Asia’s LCC fleet to grow by 13% for the second consecutive year in 2015 to slightly over 600 aircraft. Most of the figures below reflect current fleet plans while the figures for the Lion Group affiliates are estimates based on various sources. These are all net figures, taking into account retirements such as the six 777-200s at Scoot and the two A340-300s and one A330-200 at AirAsia X.

The upcoming launch of Indonesia AirAsia X, NokScoot and Thai VietJet will grow the total number of LCCs in Southeast Asia to 24. But the potential merger of Zest AirAsia with Philippines AirAsia (PAA) could reduce the total to 23.

The AirAsia Group launched PAA in 2012 and acquired Zest in early 2013. Zest adopted the AirAsia brand in late 2013 but the two carriers have since been operating separately. The AirAsia Group plans to seek approval in 2015 to remove the Zest brand and combine its two Philippine affiliates.

In 2014 the number of Southeast Asian LCCs stayed flat at 21 as Thai AirAsia X launched but Tigerair Mandala suspended operations. (Note: Indonesia AirAsia X, NokScoot and Thai VietJet all received their first aircraft in late 2014 but these aircraft are not included in the year-end 2014 tally as these carriers have not yet launched scheduled services and have so far only operated charter flights. These initial aircraft will be placed into scheduled services over the next few months and the fleets will subsequently grow as more aircraft are delivered.)

The relatively modest fleet growth for 2015 comes after several airlines have again deferred deliveries or suspended expansion. AirAsia is planning to take only five A320s in 2015 after deferring or selling 24 of its original 29 deliveries.

Both of Singapore’s short-haul LCCs, Tigerair and Jetstar Asia, have suspended fleet expansion until at least 2016. Cebu Pacific, Citilink and Nok expansion will be relatively modest – four to five additional aircraft for each carrier.

Only the Lion and VietJet groups for now do not show any signs of slowing down. VietJet plans to add another 10 aircraft in Vietnam and also launch its first joint venture, Thai VietJet, which plans to begin operating scheduled services in Mar-2015.

As CAPA highlighted on 20-Jan-2015, VietJet has already surpassed Tigerair and Jetstar Asia to become the eighth largest LCC in Southeast Asia based on current capacity. VietJet will surpass likely Indonesia AirAsia and potentially Nok in 2015.

AirAsia and Lion will remain by a large margin the largest players in the Southeast Asian LCC market, accounting for over half of the total fleet and over half of the total seat capacity. Both AirAsia and Lion are also now among the largest four LCCs in the world – a remarkable accomplishment given that Southeast Asia only accounts for less than 6% of the global fleet.

AirAsia is still larger than Lion based on capacity and fleet size, but only when considering AirAsia and AirAsia X as one entity (technically they are separate groups although they share a brand, website and distribution network). Also Lion is larger when also counting Batik but for this report Batik is excluded because it is positioned as a full-service carrier and has a separate brand.

Lion will likely overtake AirAsia as the largest Southeast Asian LCC group by fleet or seat capacity within the next year or two. Lion has a bigger overall order book and is currently committed to taking more aircraft in both 2015 and 2016. Even factoring in deliveries for Batik and placements outside the group using Transportation Partners, the Lion Group LCC fleet should surpass AirAsia/AirAsia X by early 2016.

AirAsia and AirAsia X have converted a large portion of their original A320 and A330 commitments to A320neo and A330neo aircraft to be delivered later this decade. These were sensible moves given current market conditions and the improved efficiency of the re-engined variants. Lion, which also has A320neo and 737 MAX aircraft on order, have not yet made a similar move.

Notes: only active aircraft in scheduled service are included
*Orders include announced commitments with leasing companies for new aircraft as well as commitments with manufacturers
Orders are based on location of parent; some AirAsia and Lion orders will end up outside Southeast Asia (or in the case of Lion at a full-service subsidiary) while there are no orders under Jetsar as all the group’s orders are under the Australian parent.
Source: CAPA – Centre for Aviation

The rapid expansion of AirAsia and Lion over the last decade have completely changed the Southeast Asian marketplace. LCC capacity in Southeast Asia has increased eight-fold (800%) over the last 10 years, from about 25 million seats in 2004 to nearly 200 million in 2014 according to OAG data. 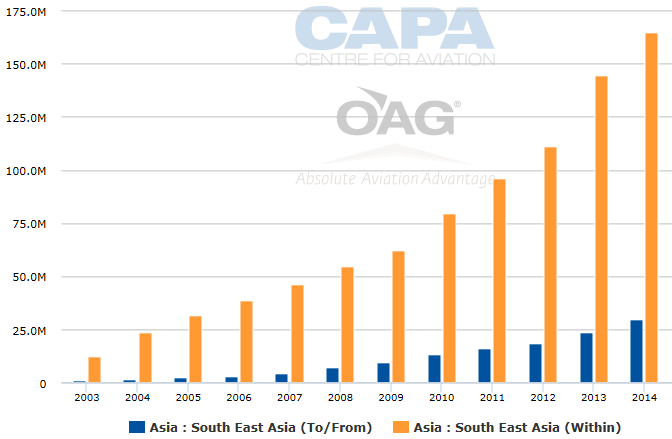 LCCs already account for almost 60% of seat capacity within Southeast Asia and are rapidly making inroads in the medium-haul market. Following the planned 1Q2015 launch of Indonesia AirAsia X and NokScoot there will be six medium/long-haul LCCs based in five Southeast Asian markets. The rest of the world only has four long-haul low-cost operators, two of which also serve Southeast Asia.

The slowdown was driven by the more moderate growth in the fleet size and a reduction in average aircraft utilisation rates as several carriers cut capacity despite maintaining or even expanding their fleets.

LCC capacity growth could pick up slightly in 2015 although fleet growth is projected to remain at about 13%. The higher capacity growth can be achieved as carriers increase utilisation rates.

The sharp decline in fuel prices has been so marked however that it has the power to refocus airline strategies, potentially accelerating this trend. The disproportionate benefits that LCCs gain from markedly lower priced fuel will undoubtedly mean that many airlines are reassessing their outlook. An (unhedged) LCC which was previously accounting 50% of its costs on fuel will now be enjoying almost a net 20% overall cost reduction, as fuel prices halved over the past 6 months. Such a massive shift in profile must inevitably influence behaviour.

But for now overcapacity remains a concern as several LCCs in the region continue to pursue strategic growth. The huge capacity increase from 2013 has still not been entirely absorbed. Even as key Southeast Asian markets such as Thailand recover competition will remain intense, pressuring yields.

Most of the region’s LCCs were unprofitable in 2014. Lower fuel prices and an improvement in market conditions should result in reduced losses and potentially a return to the black in 2015. But there is also a risk that lower fuel prices lead some players to resume aggressive expansion.

The long-term outlook for the Southeast Asian LCC sector remains bright. The region should be able to support further rapid growth as discretionary incomes continue to rise. But the return of 20% or 30% growth rates may not be realistic as the LCC market in Southeast Asia is now more mature.

Ultimately the order book, which has raised a lot of eyebrows, could see some corrections. But with fuel as a wild card and demand remaining fairly resilient, predictions are risky.