In the second instalment of Airline Leader’s report on social media, we take a closer look at airlines’ use of Facebook and Twitter. The full report can be downloaded at www.airlineleader.com 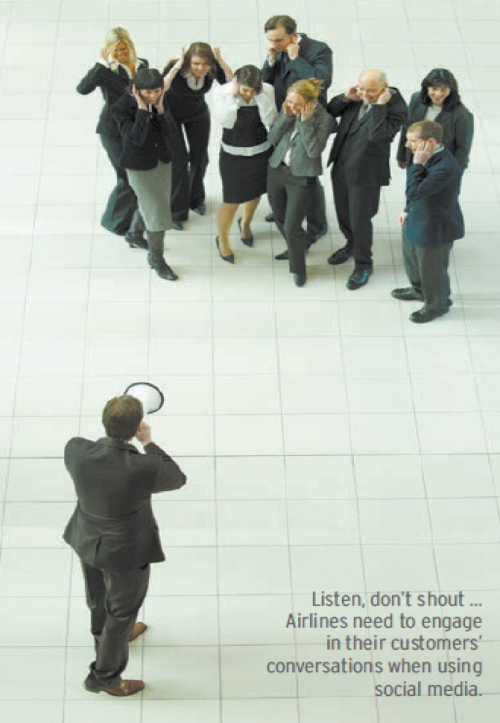 Facebook has enormous and varied popular appeal. It is increasingly a tool for information exchange and a valuable supplement for the airline's own website, where it can win new "likes" and provide a focus for special offers. It is also potentially (and controversially) a source of evolving distribution capability, containing as it does, massively detailed personal data, along with access to more than half a billion consumers.

Any self-respecting tyrant will take this to heart and block access to social media, just as Iran, Libya (and China) have. But that does not apply for most airlines, which will have to live the foreseeable future with these forms of media, immediately a challenge – but also an opportunity to understand more about target markets first hand. 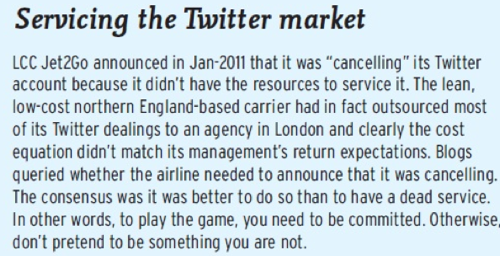 Twitter materials talk of "joining the conversation" with other users. The expression is an interesting metaphor in understanding how a commercial company might participate in that "conversation". If your airline's promotion is seen as an individual joining a group of friends talking about things that interest them, then they are unlikely to be impressed by a "suit" barging in and shouting loudly about a great fare sale. Attracting attention in this group is one thing. But doing it in an empathetic way, sensitive to the others in the room, is more likely to win lasting friends.

Facebook has been very shy of advertising as a basis for its financial model, a feature which was key to its widespread adoption in the US and internationally. One aspect now emerging is that, as they become more sophisticated in the new forms of communication, consumers are beginning to recognise the value of their own information profiles. They (we!) are also increasingly resistant to having marketing materials thrust at them. Facebook's founder recognised that from the start; for the platform provider to intrude into a "private" conversation by inserting ads is a serious negative. Commercial considerations are now eroding this position, but stiff controls remain.

Conventional promotions are thus unlikely to work in this forum. Shouting about low fares won't make you loved if those in the conversation are more interested in talking about music or TV shows – especially if your fares really aren't always that low, as you pretend. For that, your branded Company Facebook page can be used.

Don't use social media to try to change your image without changing your fundamentals. Here, more than anywhere, if you are a well-known brand, your voice will grate if the message conflicts with your popular image and performance. Try walking into your 17-year-old son's birthday party and shouting, "Hey guys, how about we all go out and do some damage!" Some of his friends might be mildly amused, but most will cringe at your trying to derail their private fun. Importantly, you come across as a fake by trying to appear to be something you aren't. You are the father image and fathers don't behave like that – or the teenagers don't want them to.

What works for a fresh young LCC often won't work so easily for a long-established legacy airline - even where it has recognised that Twitter or Facebook are for real.

One example: Delta, a genuine social media pioneer in the legacy sector, has recently gone to lengths to cultivate an image of super-receptiveness to Twitter account management. A breathless report in Business Week (16-Aug-2010) described how Delta was monitoring Twitter messages to solve customer complaints on the spot – such as quickly rebooking a tweeting passenger who didn't want to wait in line at the airport to do it after missing his connection. The airline clearly had committed resources to provide an undoubtedly useful Twitter system, with a small team monitoring and responding to customer issues during the main US east coast travel window.

But the Business Week article became a magnet for negative responses, mostly citing bad experiences. This is hardly a surprise for an airline that carries more than 160 million passengers each year, but that also had not been renowned for providing a stellar – or cheap – domestic product. That same statistic also suggests that using Twitter in this way is unlikely to provide a realistic solution to customer responses of the kind talked about, once it became mainstream. Numerous bloggers suggested it was more likely a piece of PR that the airline could not deliver on. 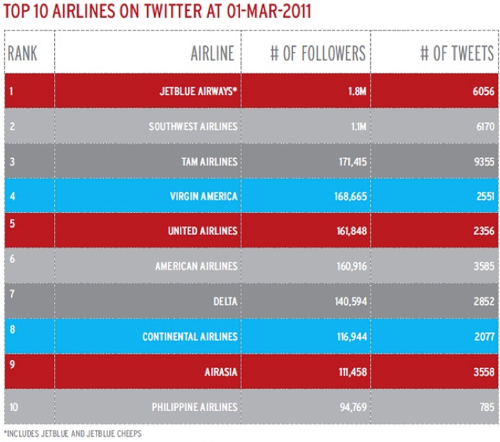 Beware of creating unrealistic "rock star" expectations. Direct Messages (DMs) can be hazardous to your (financial) health. The bloggers' judgment may have been unfair. Delta has actually thought through the issues well, introducing a well constructed Social Media Lab, with two or three social media specialists and a cross-section of operational people to assist in responses. But, if just 1% of Delta's 160 million annual passengers started to rely on DMs through Twitter to resolve hands-on instant rebooking issues, the resources needed and the duplication of effort (with conventional customer relations staff ) would quickly make this just another source of frustration for travellers.

Scaling up to handle Twitter's one-on-one communication process patently cannot work, where every person who wants to jump an airport queue finds out he or she can do it by pulling out a mobile phone. Unless there is a strategy for evolving the capability, promoting this service can simply create expectations that exceed realistic long-term capabilities.

When offered the chance, customers (and non-customers) become conditioned to getting answers and solutions as soon as they ask a question. The immediacy of Twitter doesn't expect to wait a day, or even an hour, for a reply, so someone has to be at the airline end to field and answer questions within a few minutes. This can require a high level of commitment. Under-servicing can backfire, if Twitter users feel they are merely being manipulated.

And the responses must be useful. London's Heathrow Airport, badly affected by snow and cold weather in Dec-2010, tried valiantly to use Twitter (@HeathrowAirport) to inform travellers on developments. Staff attempted to respond to individual enquiries, but the airport in fact had little information about airline schedule changes, which were well beyond its purview – but were what customers wanted. Media reports instead talked of information loops, where the Twitter response suggested calling the airline, which in turn sent them back to the airport. Or the direction was to the airport's website, which contained little useful information and apparently crashed frequently.

Every business is still very much in the learning phase of social media understanding. It is clear that airlines' customer service practices are going to have to be updated, but aside from that, gleaning and seizing opportunities is more elusive. This "fashion" is here to stay, but it won't stand still.

and, vitally, share information. The behavioural change now under way is irreversible. It substantially shifts the information power balance towards consumers. There is more to come.

SOCIAL NETWORKS TAKE VARIOUS FORMS, EACH WITH INDEPENDENT ORIGINS usually with different target markets. Hence the value of connections between the different media forms. Each has very different potential uses (and risk profiles) for airlines.

ONCE AN AIRLINE ENGAGES FULLY IN SOCIAL MEDIA, IT BECOMES A PARTICIPANT, not automatically a leader. It discards the levels of control over output that it has been used to. But it will usually be in a stronger position than if it does not participate.

SOCIAL MEDIA OFFER ONE-OFF OPPORTUNITIES FOR INNOVATORS. First movers can be rewarded disproportionately, by using the media in a coordinated way. But there can be no 10-year strategy. Actions will need to be flexible and open to adjustment, as the media evolve. Five years ago Facebook and Twitter barely existed. They too will change rapidly, or be replaced.

FOR AIRLINES, NEW CUSTOMER RELATIONS STRATEGIES ARE NOW ESSENTIAL, REGARDLESS OF ENGAGEMENT WITH SOCIAL MEDIA OUTLETS. The pointed end of social media is Twitter and instant messaging – positively, for its potential use in customer relations, marketing and selling and – negatively, for its ability to magnify problems which are not well handled.

TWITTER IS A WAKE-UP CALL TO IMPROVE MINI-CRISIS COMMUNICATIONS. This medium allows the communication process to be followed back up the communicationsoperations chain (and across an airline's "silos"). That trail can then be retraced back down the line – keeping frontline staff in the picture.

PASSENGERS FEEL EMPOWERED IF THEY KNOW WHAT'S GOING ON – and best they hear it directly from the horse's mouth than from other dissatisfied passengers sitting around in the informational dark. Every "crisis" becomes a great opportunity to shine with sensible use of the new media.

DON'T USE SOCIAL MEDIA TO TRY TO CHANGE YOUR IMAGE WITHOUT CHANGING YOUR FUNDAMENTALS. What works for a fresh young LCC often won't work for a long-established legacy airline, even where it has recognised that Twitter or Facebook are for real. And the old maxim applies – don't overpromise and under-deliver. Upscaling some of the current initiatives will become impossible as one-to-one communications propositions.

FACEBOOK (AND OTHERS) WILL BECOME A RESERVATIONS MEDIUM, WITH POTENTIAL FOR PRECISE TARGETING OF CUSTOMERS. How fast and how extensively it will be used is controversial. Google and ITA is another unknown. But one thing seems certain: the status quo will be rocked – and possibly quite quickly.

EMERGING NATIONS' USE OF SOCIAL MEDIA IS STILL IN ITS INFANCY. They are fast catching up, with massive numbers, both for Facebook and Twitter, as well as local variants. International airlines will need to be informed of, and participate in each, recognising their special features. For innovators, this offers significant offshore marketing opportunities.

NEW COST-BENEFIT EQUATIONS ARE NEEDED IN ESTIMATING A STRATEGIC COURSE IN INVESTING SOCIAL MEDIA. Convincing cynical boards will be difficult. The benefits are often "soft" and harder to account. Accumulating a body of other companies' experiences becomes an executive necessity as social media evolve. At this stage of any new phenomenon, learning from the mistakes and successes of others is key.

NEXT MONTH: We continue with a closer look at what some airlines have done and how effective they have been. In this fast-evolving market, what worked last week won't necessarily bear repeating. But there are some useful leads.