Wall Street rose for the sixth consecutive week - its longest such stretch in nearly a year - with the Dow Jones Industrial Index briefly exceeding 11,000 for the first time since Sep-2008.

Among the US LCCs, shares in JetBlue slipped 0.2% on Friday, with SmarTrend News Watch stating analysts expect the LCC to report a loss of USD0.01 per share on sales of USD863 million when the carrier releases its 1Q2010 financial results on 23-Apr-2010. In the same period last year, the company reported EPS of USD0.08 on sales of USD793 million, while in the previous quarter, the company reported EPS of USD0.04, topping consensus estimates of USD0.03.

Meanwhile, Southwest Airlines’ shares slipped 0.8%, with SmarTrend stating analysts, on average, expect the LCC to report EPS earnings of USD0.02 on sales of USD2.6 billion when the carrier reports its 1Q2010 financial results on 22-Apr-2010. For the full year, analysts expects Southwest to post EPS of USD0.59. The company reported a loss of USD0.03 on sales of USD2.4 billion in the same period last year. SmarTrend added it is bullish on Southwest shares.

Shares in GOL were up 1.2% on Friday. Last Thursday, shares in the carrier rose the most in six weeks, on improved demand in Mar-2010. The carrier added it would expand capacity by 20% this year in response to the country’s economic recovery. The carrier stated it expects 2010 to be a “very good year”. 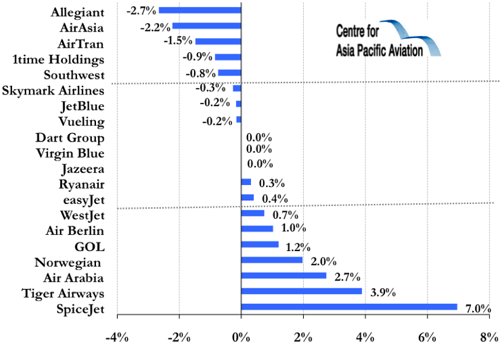