The global aviation industry is not expected to recover quickly from the economic downturn, while the swine flu outbreak has put a further dampener on the prospects for a turnaround. Airports Council International (ACI), representing 597 members operating over 1,679 airports in 177 countries and territories, stated that while worldwide traffic growth in Jun-2009 showed some “positive signs of improvement and a possible indicator that the beginnings of a more durable turn-around are in the making”, it warned that “persistent negative factors, including on-going economic uncertainty, tight financial markets, concerns about a global health threat, and geopolitical disruption in some nations, are likely to restrain the prospects of a rapid rebound”.

ACI concluded, “it is unlikely that we will recover the flat growth rate before the fourth quarter of the year”.

The outlook for world’s largest economy, the US, remains unclear. Commenting on US GDP, which is estimated to have contracted by 1% in 2Q2009 relative to 1Q2009, The Conference Board stated, “the path to recovery remains a long haul, with more disappointments likely in the months to come”.

The Conference Board Chief Economist, Bart Van Ark, added, “the contraction [in 2Q2009] - though less severe than most forecasts - offers no sign of a V-shaped recovery. Consumer spending came out worse than expected and is likely to remain weak into the third quarter because of ongoing clogging in income and credit channels.

Mr Van Ark stated that the “very rapid decline in inventories”, which decimated global air freight volumes in late 2008 and early 2009, “raises hopes for a recovery in industrial production, but also increases chances of a pushback later in the year, as domestic and global markets remain weak”.

Airports are also unlikely to see strong rewards soon. ACI reports that global traffic in Jun-2009 was down 5% year-on-year, following an 8% slump in May-2009. 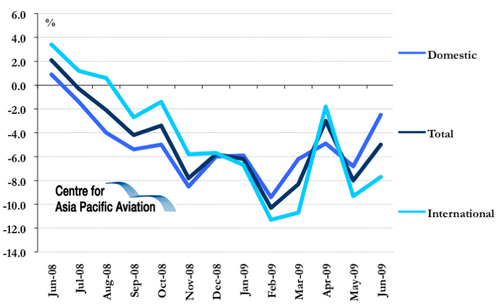 The fear of the swine flu virus’ spread was a “determining factor” in poor international traffic results in the Asia Pacific markets (-11.7%) and in North America (-8.7%), according to ACI. The airports body added, “overall, there were few bright spots and without strong growth in China, the picture would look far less positive. International traffic growth lags behind, which could be a worrying sign for the key travel months July and August”. 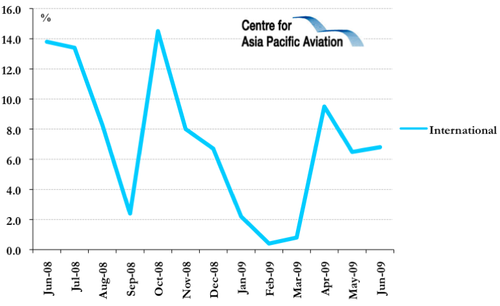 Worldwide freight traffic was down 13.5% in Jun-2009. ACI commented, “although still starkly lower than June 2008, the gap with the previous year’s growth has narrowed when compared to performance over the first six months, which was down on average by 18.8%”. 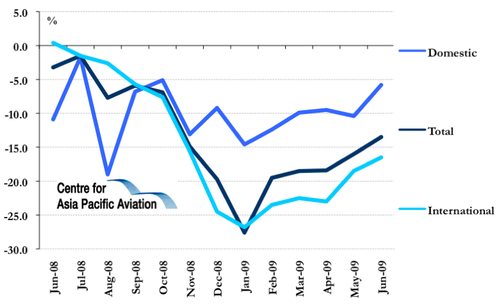