Alaska Air (+0.3%) also made a minor gain for the session, after Nasdaq stated the carrier is trading at a 12-year high. The carrier’s stock has risen 14% in the last month and ended the current session at USD54.05.

Republic Airways (-0.3%) slipped after Deutsche Bank analyst Michael Linenberg raised his rating of the carrier’s stock from "hold" to "buy". Mr Linenberg also lifted his price target for Republic from USD6.50 to USD13.00, as well his earnings forecast. The analyst attributed the increases to the integration of Frontier Airlines and Midwest Airlines into “one successful operating model”. Republic’s stock has traded in a 52-week range of USD4.48-9.58. It closed trading at USD8.07. 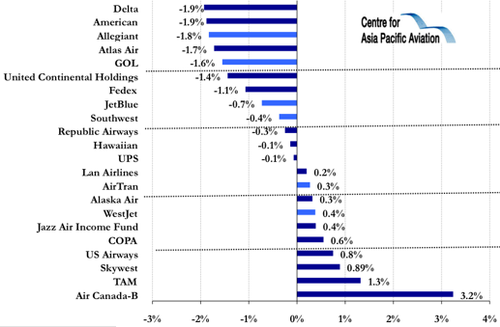