The first part of this report on airline market capitalisations, suggested the world’s airlines are today worth approximately USD570 billion, based on the current market caps of listed airlines and the global fleet as a basis for extrapolation.

But, as noted, discounting the fact that many of the world’s best-run airlines are already listed, (having benefited from the disciplines of privatisation), the true value of the remainder is probably much less.

Indeed, the world’s airlines (listed and unlisted) may have a combined worth equivalent to the largest single company by market capitalisation, Exxon Mobil at around USD420 billion. (Note: the world's leading company, Saudi Aramco, which is responsible for Saudi Arabia's massive oil reserves, is unlisted and valued at around USD780 billion, according to the Financial Times).

Star Alliance has biggest capitalisation, but SkyTeam the best average

Even combining airlines in their global alliances creates small economic entities by corporate standards. (The alliances themselves have emerged because cross-border mergers in the industry have been so difficult and competition concerns so rigid).

Star Alliance has 14 listed members and unsurprisingly has the biggest combined capitalisation of USD71.7 billion. Some 108 individual companies have market capitalisations in excess of the listed Star alliance carriers.

But the most valuable alliance, in terms of the average of its listed carriers, is SkyTeam, at USD5.16 billion – just ahead of Star (USD5.12 billion) and well ahead of oneworld (USD3.74 billion).

North American and European airlines out of favour

Airlines in established markets are definitely out of favour. 23 European airlines (26%) of the total, accounted for just under 20% of global market cap. The figures were similar for North American airlines.

The average market capitalisation of the 87 listed airlines surveyed by the Centre for Asia Pacific Aviation (CAPA) is just under USD2.4 billion.

Emerging markets are the place to be

On the other hand, just 20 Asia Pacific airlines (accounting for 23% of the world’s listed carriers) represented 51.6% of total world airline capitalisation. 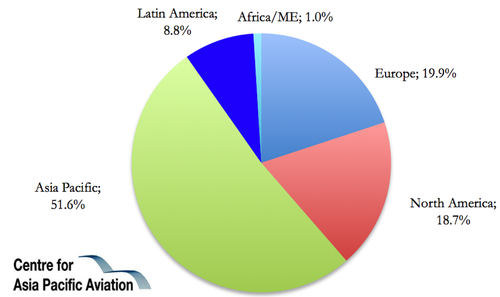 The four listed Latin American airlines (LAN, TAM, COPA and GOL) had an average market capitalisation some two times the global average, while Asia Pacific airlines were also above average. (NB: there are several smaller European and North American regional carriers that do affect the average). 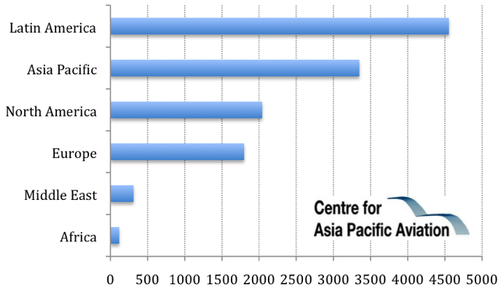