Skymark Airlines shares soared 19.7% to JPY910 yesterday for the largest gain since 04-Nov-2009, the gain of JPY150 representing the daily limit.

The airline stated it plans to order nine more A380 aircraft in addition to the four it has announced. The carrier added it would finance its order through profits and leasing, allaying concerns it may issue new shares to fund the purchase.

Cathay Pacific stated it expects the consolidated profit for 2010 would "not be less than HKD12.5 billion (USD1.6 billion)" as demand for passenger and cargo services had "remained very strong with revenues at high levels". The anticipated result is nearly a tripling in its full-year profit from HKD4.69 billion in 2009. Shares in the carrier declined 0.2% yesterday.

China Southern Airlines’ Hong Kong-traded stock was raised from “neutral” to “buy” at Nomura. The target price is HKD7.20 per share. Shares in the carrier gained 0.4% yesterday. 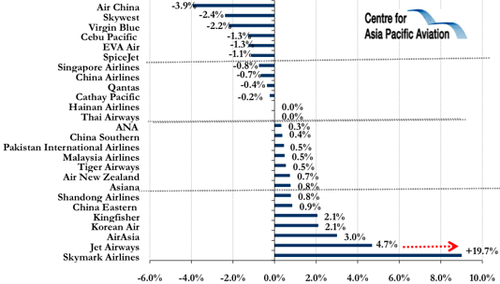