Skymark Airlines stated it plans to purchase four A380s with two options to become the first Japanese customer for the aircraft signing an agreement in principle with Airbus. Skymark plans to introduce the aircraft in the fiscal year commencing Apr-2014 and will sign a purchase agreement next spring. Shares in the carrier gained 5.6% yesterday.

SpiceJet shares rose 2.8% yesterday. The LCC has confirmed its order for 30 B737-800s in an agreement worth around USD2.7 billion. Also in the Indian market, Kingfisher Airlines shares has rallied 5% to INR86.40 on reports the company has drawn up an emergency three-month turnaround plan to restore the financial health of the company. Reports have claimed that the strategy “includes a debt recast, putting grounded planes back on the flight roster and slowing down the expansion of loss-making overseas operations”.

Cebu Pacific handled 20% more passengers in the first nine months of the year, according to a statement by the company. The airline will add services to Hong Kong, Singapore, Kuala Lumpur, Ho Chi Minh, Jakarta and Brunei next month, and to Bangkok and Seoul early next year. The stock fell 3.9% to PHP117 yesterday.

Qantas shares dropped 2.1% to AUD2.80 yesterday as the carrier stated it found issues with three more Rolls-Royce engines in testing after last week’s engine blowout that forced an emergency landing in Singapore. CEO Alan Joyce stated the carrier does not expect to put the A380 aircraft back into service for at least another 72 hours. The carrier is continuing checks. 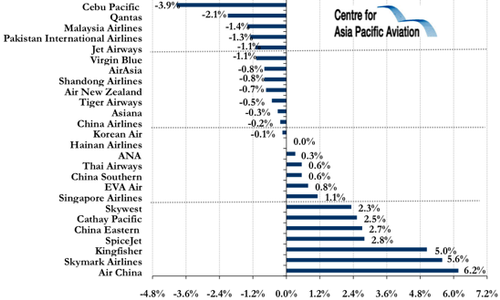