Shares in Japanese LCC Skymark Airlines (+8.55%) continued on their recent growth pattern and were among the strongest gainers on the Tokyo Stock Exchange on Friday (22-Oct-2010). Shares in AirTran (0.13%) remained relatively stable despite tripling its 3Q profit on record traffic.

Among the gainers, shares in Skymark Airlines continued to strengthen on Friday gaining 8.55% after the carrier earlier in the week stated it more than doubled its net income forecast for the year ending Mar-2010 citing strong sales.

Shares in SpiceJet gained 6.6% on Friday to be considerably above the INR57.76 ongoing open offer by Kalanithi Maran and KAL Airways (closing date 06-Nov-2010). Shares in the LCC have gained 116% over the past year and is trading at almost 23 times its trailing 12-month earnings.

The strong rally in AirAsia (+1.6%) shares have increased the LCC’s market capitalisation to MYR7.6 billion (USD2.26 billion) mark, surpassing Malaysia Airlines’ MYR7.5 billion. It boosted the carrier’s share price to an all-time high of MYR2.58 on 21-Oct-2010. Analysts covering the sector mostly gave an “outperform” or “buy” call on AirAsia.

AirTran (+0.13%) announced on Friday it more than tripled its 3Q profit on record traffic and unrealised investments, but increasing costs at the LCC and weaker-than-expected revenue growth left the share price relatively stable. 3Q2010 operating revenue increased 12% to USD668 million, compared with USD686 expected by analysts. Net income was USD36.3 million and excluding investment gains,  earnings were USD12 cents per share, USD5 cents less than Wall Street expected. Operating costs at the LCC rose 9% on increased fuel, maintenance and aircraft insurance costs. AirTran shares are up 43% this year and 64% since the Southwest’s takeover announcement.

Meanwile, AirTran’s suitor Southwest Airlines fell 1% as Hudson Securities analyst Daniel McKenzie maintained a buy rating and USD17 price target on Southwest stock. In a research note, McKenzie stated he was raising Southwest’s EPS estimate for the 4Q2010 to USD18 cents from 16 cents. He said a 2011 EPS estimate of USD1.10 factors in an addition of "roughly" USD10 cents from the LCC’s pending acquisition of AirTran Holdings. McKenzie added that he believes Southwest's new revenue management system will drive growth to international and smaller markets. The analyst stated that “with the stock trading at 12.4 [times] our 2011 EPS, we think there is more value to be had".

Virgin Blue shares remained unchanged at AUD 45 cents on Friday. The carrier was downgraded from "outperform" to "neutral" by Macquarie Group Ltd stating it believes the market is overestimating a recovery in earnings this financial year. Market consensus is for the airline to report a profit before tax of AUD112 million for the full year.

Macquarie Equities stated V Australia would likely operate at a loss for longer than expected as a result of concessions made to US regulators that had opposed its tie-up with Delta Air Lines placing a continued burden on Virgin Blue. Virgin Blue and Delta have guaranteed that they will not reduce services on the Australia-US route for two years. Virgin Blue also made big concessions to the Australian competition regulator in an attempt to overturn opposition to a joint venture with Air New Zealand on the trans-Tasman route.

1time Holdings fell to its lowest level in almost a year, dropping 3%. The Johannesburg-based LCC stated that the outcome of talks with black investors may affect its share price. 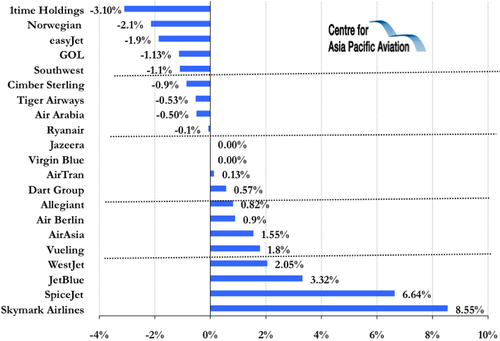