Skymark Airlines has announced a surprise ‘basic agreement’ with Airbus for four A380s with options for two more. With the agreement, Airbus has gained a foothold with its flagship aircraft in a key market where Boeing has long enjoyed a near-monopoly. Skymark will become the first Japanese customer for the aircraft and the first LCC to order the A380.

It comes amid a once-in-a-generation structural transformation of Japan’s airport sector, as fresh capacity at Tokyo-area airports open up new opportunities for market liberalisation. New aircraft technologies, such as the B787 and A380, as well as new airline business models (namely the expansion of LCCs into the North Asian market) are also set to dramatically change the market dynamics for airports.

Skymark plans to introduce the A380 aircraft in the fiscal year commencing Apr-2014 and will sign a purchase agreement next spring. Two aircraft will be delivered in 2015, followed by two in 2016.

Geoffrey Tudor, from Japan Aviation Management Research, said the Skymark news was very surprising, stating, “it is known that they have an ambition to start international services, but to leap into the market with this enormous airplane is really, really quite a surprise”.

The order from Skymark means there could finally be an A380 configuration that reflects its high capacity potential. Air Austral plans to configure its two A380s on order with “around 840 seats”. Skymark will likely configure its aircraft with around 700 seats. See related report: Airbus A380 rewrites the mass market rules. Airbus now marketing seriously low cost aircraft

Airlines with firm A380 orders

Boeing has long held a near-monopoly in the Japanese market with a share of around 95%. Airbus will be hoping this order will stimulate more activity in the Japanese and wider North Asian markets. The order is worth EUR1.39 billion at list prices. 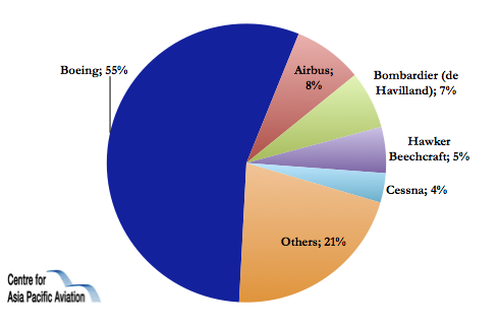 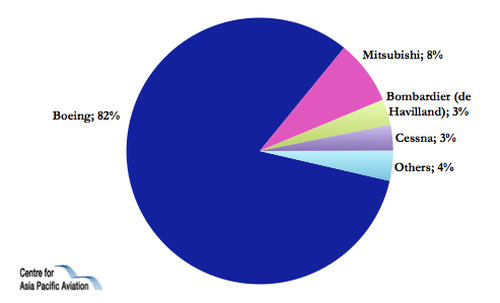 The move is also welcome news after a week of bad press for the A380 related to Qantas' grounding of its fleet of six A380 jets after an engine failure on a flight from Singapore to Sydney last week. Tests have uncovered oil leaks in three Rolls-Royce engines on the grounded A380s. See related report: Qantas, Airbus and Rolls-Royce seek to limit the damage as Rolls’ shares plunge 10%

While Airbus is pleased by the new A380 order, the carrier’s shareholders are seemingly very unhappy. The carrier’s shares fell the most in five years – by as much as 16% for its largest intraday decline since Mar-2005 - in Tokyo trading after the announcement of Skymark's A380 and international expansion plans. Despite the recent drop, shares in the carrier have more than doubled in 2010 as the carrier's profitability has improved (see below) and compares favourably with a 13% decline for the Tokyo Index.

The plunge in the shares reflects concern about the risks Skymark faces in moving into a completely different business and competing head-to-head with ANA, JAL and other established and well-funded international carriers. The order also raises questions about how the carrier will finance the aircraft. The order will likely be financed through ECA sources.

Skymark, which commenced operations in 1998, is a small player in Japan in a market dominated by ANA and Japan Airlines. Skymark employs nearly 1,400 people and operates a domestic network from its base at Tokyo Haneda International Airport. The carrier serves around 3 million passengers p/a on routes to Sapporo, Fukuoka, Kobe and Okinawa.

Mr Shinichi Nishikubo, who made his fortune with an ISP company and his travel company H.I.S, took control of the privately held, listed company in Nov-2008. Skymark is the only start-up Japanese airline that has remained independent of the two Japanese majors, ANA and JAL. It was substantially profitable in 2009. Earlier problems with pilot shortages have fortuitously been overcome as there is now a glut of pilots in Japan, following JAL's bankruptcy.

Many changes in the Japanese market

The past few months have been a turning point for Japanese aviation.

A key recent development was the signing by Japan and the US of an open skies MoU on 25-Oct-2010, moving the process a step towards full open skies between the countries. As part of this, JAL-American Airlines and ANA-United Continental Holdings plan to collaborate on scheduling and sales with antitrust approval granted by Japan the previous week.

Japan has also signalled its intention to conclude open skies agreements with China and Indonesia by FY2012, as part of plans to attract new airlines to the country. MLITT Minister (and CAPA Transport Minister of the Year 2010) Sumio Mabuchi stated: "We hope to reach (open skies) accords with members of the Association of Southeast Asian Nations" and other Asian economies. The country has signed similar deals with ten other countries and regions since 2007, though Tokyo Narita and Tokyo Haneda airports were not included in the agreements as there was no room for additional slots at the time.

The government also plans to reduce airport fees in the notoriously high-cost Japanese system. Even high cost Tokyo Narita is considering developing an LCCT. Japan also plans to expand Haneda Airport's new international terminal building as early as fiscal 2013 to meet the forecast 30,000 additional international flight arrivals and departures in the year. Tokyo Narita has also stated it would further increase slots after raising its annual number of slots by 20,000 to a maximum of 220,000 in Mar-2010.

Jetstar already serves Japan, while AirAsia X is launching Kuala Lumpur-Haneda service on 09-Dec-2010. ANA, which will be the launch B787 customer in 1QFY2011, plans to launch a LCC subsidiary with Hong Kong’s First Eastern Investment Group by the end of 2010. JAL has also indicated it is looking at an LCC option.

And with Skymark's high density A380s on the horizon, it all adds up to a very large and exciting step change for Japan's aviation industry.