European airline shares were hammered in 2008. With just a few days trade remaining, Air France-KLM was hit hardest (-60%) of the listed full service airlines, mainly due to investor concerns over its growth and earnings outlook - and perhaps a lack of deal making. Main continental rival, Lufthansa, has acquired several carriers this year and is sniffing around for more, such as SAS (-55%) and investors marked the German airline down (only) 42%.

British Airways' flirtations with other oneworld members failed to mask the troubles the airline faces in its premium markets, with the stock falling 46%. Potential merger partner, Iberia, suffered a one third reduction in its share price in 2008.

Investors also took the chainsaw to perennial loss-maker, SkyEurope, lopping 87% off its share price value in 2008, followed by Norwegian (-80%) and Spain's Vueling (61%). Air Berlin (-59%, despite a late rally on rumours of a buy-in by Etihad) and easyJet (-58%, due to a case of severe Steliosis) rounded off the LCC rout.

Ryanair, engaged in running battles with virtually every regulator and airport in Europe, as well as takeover target, Aer Lingus, has suffered a comparably tame one third drop in its share price. Aer Lingus dropped 30%.

The outlook for European airlines is dominated by the crushing blow recession will have on demand and yields, but airline stock market fortunes will also rise and fall on M&A activity that is expected to intensify in 2009. 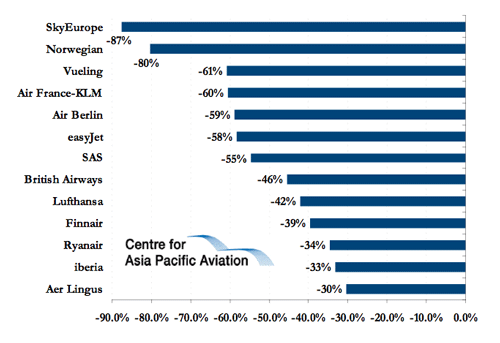