But the underlying softness of the economic environment meant that airlines did not generally follow the upward movement.

SkyEurope (-8.0%) in particular was punished for reporting an EBIT loss of EUR56.1 million in 2008, much worse than its loss of EUR20.9 in 2007, after being "significantly impacted by the high fuel prices". This was not helped by its recognition of the need to reduce capacity too, announcing a 19% reduction over the winter, although it will "impact our unit costs ex-fuel negatively".

Austrian Airlines too, which had been prospecting to expand its ownership of Ukraine International Airlines, is now to sell back its 22.5% holding in that carrier at a nominal value. Amid low interest, Austrian (-3.4%) became the second worst performer. 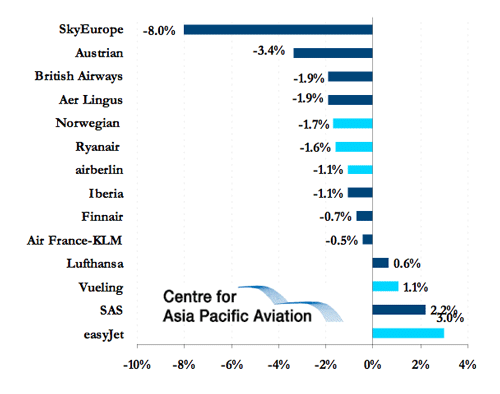