Changi Airport reportedly made a USD42 million offer for the 2.7% stake. This is reportedly less than Clessidra is seeking. GEMINA investors request Clessidra/Changi complete the transaction by 28-Feb-2010, when the current shareholder agreement expires. Changi would replace Clessidra in the new investors’ accord, which will be renewed for three years.

GEMINA has been subject to much speculation this week regarding its ownership, with reports earlier this week that the Benetton family, the largest shareholder in GEMINA, plans to restructure its shareholdings. The Benetton family holding company, Edizione Srl, operates in the infrastructure sector through its subsidiary, Investimenti Infrastrutture, which holds a 29.35% holding in GEMINA. Edizione also operates in the retail sector, with a shareholding in Autogrill, which lost 0.8% in trade yesterday,

In the South Pacific region, shares in Auckland Airport dipped 0.5% yesterday, in the first trade of trade since its trading halt was lifted. 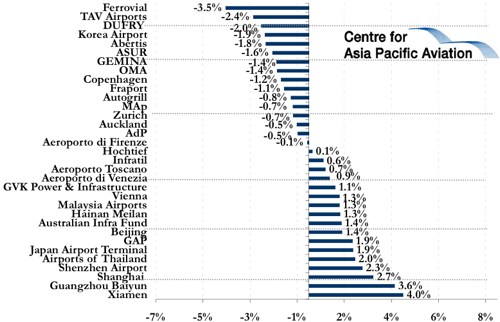