Singapore Airlines' shares went against the global tide, rising 0.3% yesterday, as CEO, Chew Choon Seng, confirmed the carrier is "still interested in the consolidation of the industry". Investors see this as a sign of relative strength. Mr Chew is unlikely to be tempted back to China in the near term, however. Shares in China Eastern Airlines and Shanghai Airlines are suspended, as merger talks progress. The loss-making airlines together control around 47% of the Shanghai air market.

Asia Pacific carriers are expected to report a USD1.4 billion combined operating loss in 2009, and a USD3.3 billion net loss, according to IATA. The losses are an improvement on last year's USD2.3 billion and USD3.9 billion operating and net losses, respectively, but significantly worse than IATA predicted just three months ago.

Shares in Cathay Pacific eased 3.2% as CEO, Tony Tyler, stated the carrier is seeking to defer more aircraft orders amid the downturn, although no further capacity cuts are planned at this stage.

India's Jet Airways is also seeking to defer more aircraft deliveries and plans to reduce capacity by an additional 10%, on top of the 30% reduction already implemented. Its shares slumped 12.3%, while Kingfisher and SpiceJet were 10.2% and 9.6% lower, respectively. India's Sensex index fell 3% yesterday. 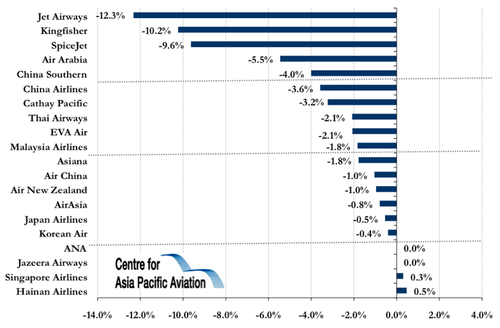