Singapore Airlines unveiled a 36.2% fall in Group net profit in the three months ended 30-Sep-08 and warned of storm conditions ahead.

Passenger load factors have been falling for three quarters now, while yield growth peaked in the Oct-Dec-07 quarter (SIA's third quarter last financial year). The global economic downturn is expected to place further downward pressure on yield in the months ahead. 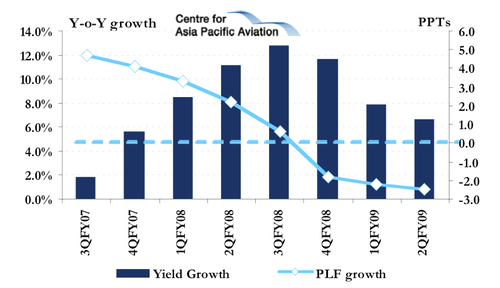 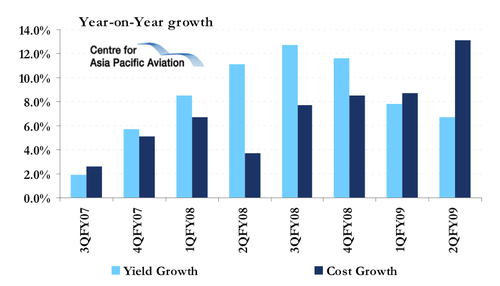 As such, the gap between actual and break-even load factors continues to close. 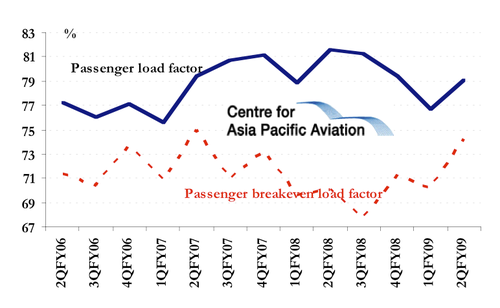 The first half highlights were as follows:

All major subsidiary companies contributed poorer profit results in the first half:

Outlook challenging, but SIA working from a position of strength

SIA stated the financial turmoil around the world and weak consumer confidence are impacting demand for air transportation and lthough advance bookings for the immediate next quarter are holding up reasonably well, "there are signs of weakness beyond that".

The airline noted that while fuel prices have retreated, but fuel remains the biggest single item of operating expenditure.

But other challenges are weighing on the airline, including recent volatility in currency markets presents. The carrier stated that with fuel and aircraft related payments in US dollars, the sharp appreciation of the US dollar and the concurrent depreciation of the Euro, UK pound and Australian dollar "is an adverse development, partially mitigated by the company's ongoing currency hedging programme".

SIA suspended services to Osaka via Bangkok from May-08 and Los Angeles via Taipei from Oct-08. From Feb-09, services to Amritsar will also be withdrawn. For the Northern Winter schedule, the Company will be making progressive changes to flight frequencies to destinations in Southeast Asia (Penang and Ho Chi Minh), North Asia (Seoul and Osaka) and West Asia (Bangalore and Chennai).

The airline concluded that its sound finances and low level of debt "put it in a position of strength" and management would monitor business trends closely and respond appropriately.