Singapore Airlines, upon the release of the carrier’s Oct-2009 traffic results, stated there are “encouraging signs that the decline in demand may have bottomed out”, with the airline also seeing “increasing demand” in the premium classes.

This echoes comments made by the carrier last week, in which the airline, which traditionally generates 30-40% of total revenue from premium travellers, stated it is seeing a “definitive pickup in bookings in business class”, adding that “bankers in suits (are) back in business class and first class”.

Passenger numbers down for 12 consecutive month in Oct-2009

During Oct-2009, Singapore Airlines experienced a 9.6% reduction in passenger numbers to 1.4 million, for the 12th consecutive month of passenger reductions, as the carrier reduced capacity (ASKs) by 10.3%, as part of continuing efforts to better match capacity to reduced demand levels. 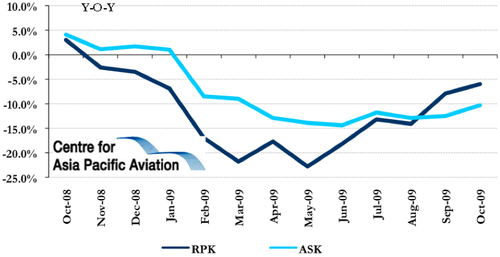 Load factor increased as a result of these efforts, up 3.6 ppts to 81.1%, for the second consecutive month of load factor improvements. 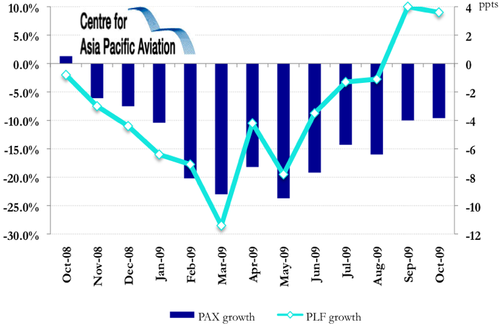 SIA cargo, meanwhile, experienced a 3.1% reduction in traffic in the month, with load factors improving 6.0 ppts to 65.4%, as a result of “tight capacity management as well as the general improvement in market conditions ahead of the traditional airfreight peak”. 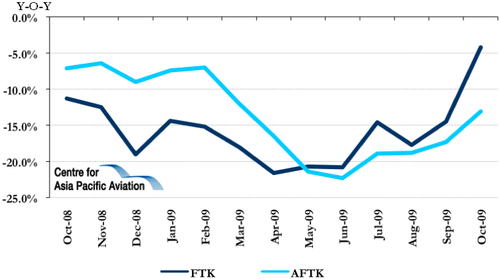 Singapore Airlines, earlier this month, stated it may reintroduce some capacity following improved in travel demand, with CEO, Chew Choon Seng, stating, “there are clear signs from the pattern of forward bookings that have been coming in, that there is not just a narrowing of the drop, but some real growth starting to come in…we may be putting back some capacity on routes where demand is clearly outstripping the capacity we have”.

The carrier added that it expects load factors of approximately 80% as the global economic situation improves and stated that it does not see a need for a second round of cost cuts.

However, Mr Chew, despite his optimism, has cautioned that it would only be possible to state whether traffic is recovering after nine months of sustained improvement.