Singapore Airlines today reported its worst ever decline in passenger traffic. Revenue Passenger Kilometres were down 17.0% and passenger numbers fell by 20.2%.

(Statistical note: these figures are compared with Feb-08. That month included one more day, as it was a Leap Year; the month of Feb-08 also included the Lunar New Year holiday, whereas this year it occurred in January.

The effects are to magnify the passenger downturn, by between 5-10%. The effect for freight is slightly different; like passenger numbers, volumes are reduced by the shorter month, but are normally negatively affected by the New Year holiday - ie freight falls are probably slightly understated.) 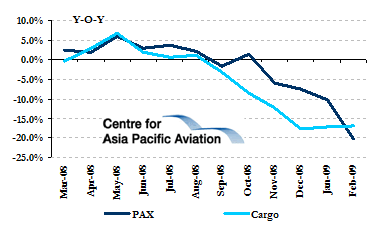 The worst declines in load factor occurred on European routes (-10.2%) - unsurprisingly, long haul is worst affected (although SIA did not report ASK changes for route groups, so that it is not clear where capacity was reduced - or not).

The Americas were also badly affected, with an 8.3% LF fall. But SW Pacific (Australia and New Zealand) routes were least affected, with a fall of only 4.4%. reflecting to some extent reduced capacity. 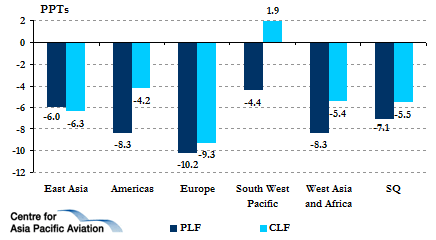 The Americas markets are becoming a severe burden for Singapore Airlines, after high hopes with longhaul all-business services, which have all suffered as the US economy tanked in the second half of 2008.

This comes despite the introduction of the smaller B777-300ER on the San Francisco service via Hong Kong and the termination of Los Angeles (via Taipei) service. 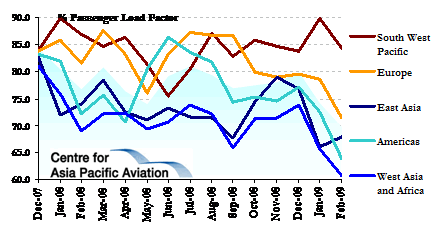 SIA is rapidly dropping capacity, by reducing service on higher frequency routes, attempting not to cut routes altogether. From capacity growth levels nudging 10% in mid-08, capacity is now down significantly (although, as noted above, the 8.5% decline needs to be adjusted).

Further capacity cuts will be necessary, and SIA: "will continue to monitor traffic movement and make appropriate adjustments to its route network where necessary to match capacity to demand." 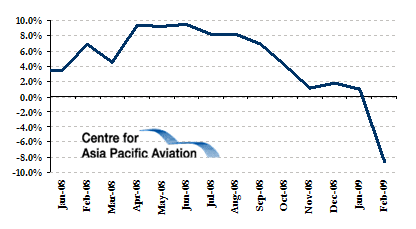 And, as is graphically illustrated in the following chart, a worrying feature is the growing depth of the load factor declines - despite significant reductions in capacity. 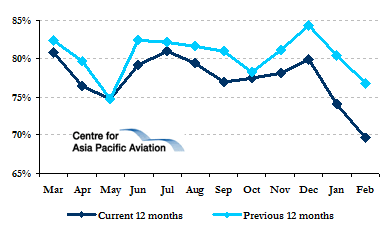 Changes of this magnitude automatically flow through to the bottom line, as discounting seeks to generate higher loads.

But, despite this, it is clear that the carrier has been unable to match prices and capacity reductions with slower demand: "The prevailing global economic crisis has significantly dampened travel demand, translating to weaker uplifts."

These impacts will appear when SIA reports its financial results - and the outlook appears to be worsening rapidly. However, to gain a clearer picture (in view of the statistical differences year on year), the March and March Quarter figures will be more revealing and reliable.