Singapore Airlines loss of SGD157 for 2Q09. Yields still in the doldrums and declining

SIA made an operating loss of SGD157 million for the second quarter of its financial year, 1-Jul-2009 to 30-Sep-2009. While less than the first quarter loss, this sequence of three successive quarterly losses is still unfamiliar territory for the airline. This represented also the airline’s first back-to-back quarterly net loss for seven years. Singapore Cargo also is steeply below the line, although, like the passenger side, the loss for 2Q, was less than for 1Q. 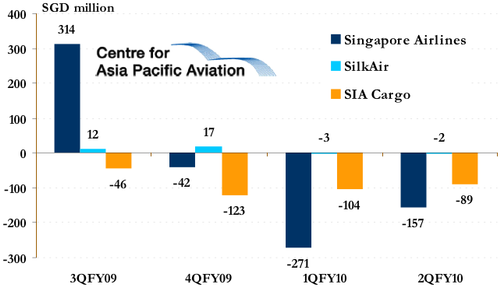 For the Group, the figures looked a little better in percentage terms, with SIAEC generating an operating profit, of SGD47million for the full half and the now-offloaded SATS also contributing a portion of the SGD71 million it earned for the period 1 Apr-2009 to 31-Aug-2009, when it left the Group. 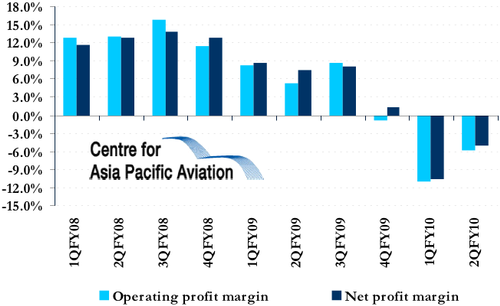 The full six month operating result for the Group was constituted of:

There is only mild cause for optimism, as SIA’s “advance bookings indicate that demand for air travel has stopped declining and is gradually recovering,” according to the carrier’s statement.

But yields are still unpleasantly low and this is where Singapore Airlines is really suffering. 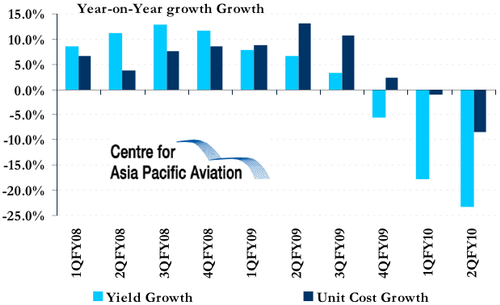 With 2Q breakeven load factors for SIA, at 88.8%, still 9ppts above the actual, of 79.6%, that shortfall suggests the carrier’s statement that ”the capacity programmed for the remainder of the year appears well matched to the demand” is out of line with reasonable projections. 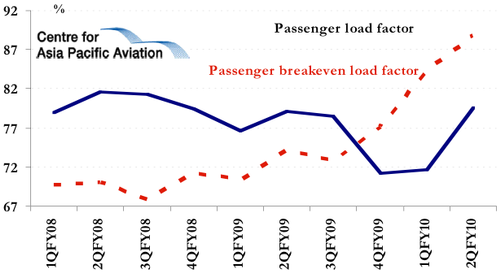 Managing capacity? A challenge in 2010

There is also a significant order list for delivery in 2010, all of them long haul widebodies. Unless there still to be announced plans for delays in these deliveries, or for an accelerated rate of withdrawal of older aircraft from the fleet, SIA appears to need a strong recovery in the market if it is to fill these seats.

SIA has been cutting back on capacity as the market declined, but the continuing arrival of new deliveries is making this difficult. In the three months to 30-Sep-2009, ASK growth – albeit negative - was actually up when compared with the previous quarter. 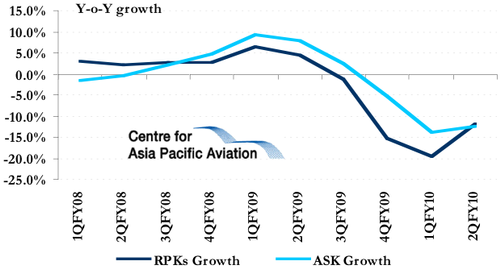 Load factors have at least stabilised in the last quarter, albeit well below breakeven. This helps explain the dilution of yields, even while capacity is being reduced. Ideally the carrier would have at least 10% less seats in the market right now – and a heavily disproportionate amount of those would be business and first class seating. 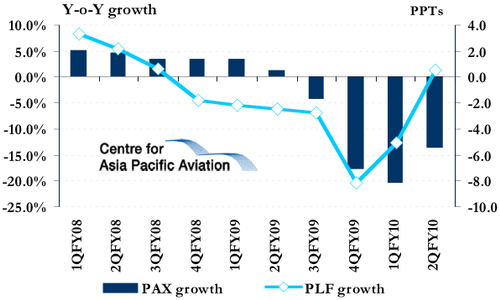 The following table shows where Singapore Airlines started this new financial year. Europe capacity in ASKs had substantially increased year on year (FY2009 vs 2008), by 17.3%, well ahead of RPKs, as new equipment was added, a feature which is now being wound back slightly. The Americas were already reduced, as the latter half of the period saw the US market scream into reverse. But the biggest contraction in the current financial year since then has been on east Asian routes.

The big issue: no comfort for another 6 months - unless the market improves much faster than expected

The bottom line in the official statement gives little cause for hope that the yield situation will be addressed quickly: “The market conditions allow for some rollback of promotional pricing but yields are unlikely to get back to pre-crisis levels within the next six months.”

SIA is not likely to be returning to profitability soon, unless there is a spike in traffic. But the premium end of the market offers scant hope of any recovery in yields for all those comfortable front-end seats.