Shares in Singapore Airlines slipped 0.1%, despite the carrier reporting a net profit in the three months ended Jun-2010, reversing a year-earlier loss, as the global economic recovery boosted air travel. The carrier added that it expects the recovery to continue to underpin its business for the remainder of the year.

The carrier commented: "Advance bookings indicate that the year-on-year recovery in passenger carriage and yields evident in the quarter to June will hold up for the rest of 2010.” SIA added, "Similarly, leading indicators, as well as sentiment among shippers and forwarders, suggest that the recent resurgence in air freight may be sustained in the near term, although the rate of growth may abate."

Subsequent to close of trading yesterday, Air New Zealand (shares up 0.9% yesterday and +1.8% in early morning trading today) reported that group-wide yields for the financial year to date were down 7.1% year-on-year, with short-haul yields down 5.4% and long-haul yields 10.7% weaker on a year-on-year basis. Removing the impact of foreign exchange, group-wide yields were down 4.9%”. The data however suggests an improvement in the yield environment for the carrier.

In other yield related news, Cathay Pacific CEO, Tony Tyler, in an interview with the Wall Street Journal, stated the carrier has seen a "significant recovery" in premium traffic, adding: "It's not back to the 2008 levels, but that would set quite a high benchmark because that was the peak of the pre-crisis bubble. But it is back well above where it was last year”. Shares in Cathay Pacific declined 0.4% yesterday.

South Korean shares closed on Monday at their highest levels in 2010, largely due to better-than-expected 2Q2010 GDP data, strong US corporate results and on relief that European bank stress tests (conducted by the Committee of European Banking Supervisors) showed a reassuring level of robustness.

Airline stocks also rallied, with Asiana Airlines soaring 8.6% after the company announced it would raise fares on some international routes next month to cover the cost of new aircraft and service upgrades. Shares in Korean Air also gained (+2.6%), with the carrier previously announced plans to increase its international fares. 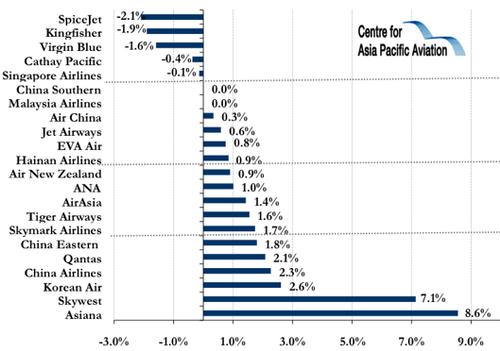