Singapore Airlines (SIA) has suffered year-on-year load factor reductions in every month of 2008, the latest a 1.1 percentage point fall in Jul-08. Capacity growth in 2008 has been strong for SIA, with a further 8.2% year-on-year expansion in Jul-08. While this is great news for Changi Airport, airline yields could be suffering, as demand growth fails to keep up with aggressive capacity expansion. 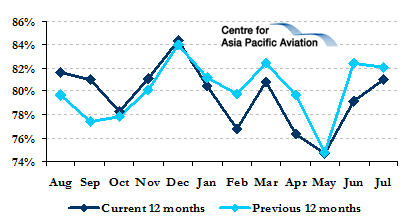 Capacity growth in 2008 has been strong for SIA, with a further 8.2% year-on-year expansion in Jul-08. While this is great news for Changi Airport, airline yields could be suffering, as demand growth fails to keep up with aggressive capacity expansion. 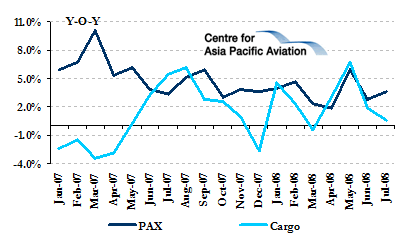 The delivery of a number of new aircraft to SIA in recent months has resulted in extra frequencies to Europe (Moscow, Manchester, Zurich, Paris, Milan and Barcelona), Southwest Pacific (Sydney, Brisbane and Auckland), East Asia (Ho Chi Minh City and Bangkok), Americas (Houston) and West Asia & Africa (Delhi, Chennai, Bangalore and Dubai). The deployment of the larger A380, in place of the B747-400s, on the London, Sydney and Tokyo routes also contributed to the capacity increase, according to SIA.

The airline reported passenger load factors for the East Asia and West Asia/Africa route regions fell, "due to new capacity introduced to these regions not yet being fully met by traffic growth". China traffic has been affected by the "stringent visa restrictions for travel into China and the curb on travel from China prior to the Beijing Olympics", according to SIA. 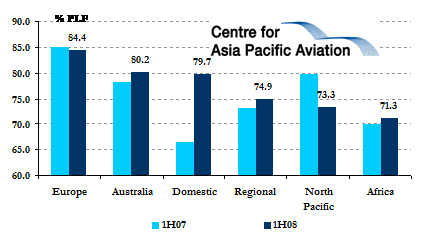 SIA stated that passenger load factors in the Americas route region declined sharply by 5.5 percentage points in Jul-08, off a very high base, amid some signs of a softening in the leisure markets from the USA. 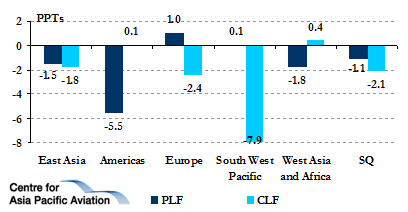 As reported in last Wednesday's edition of Asia Pacific Airline Daily (13-Aug-08), "as new aircraft deliveries continue to flow into the fleets of Asia's airlines they have two choices; grow, or ground older aircraft. Growth - rather than replacement - is quickly becoming the order of the day. Relief in the form of falling fuel prices will intensify this trend".

A factor driving the build-up in capacity by SIA and its rival Asian hub carrier, Cathay Pacific, is a defensive play against the fast-growing Middle East airlines and their hubs. As a proportion of total fleet orders in the Boeing and Airbus order books, Middle East carriers now account for 13% of the total.

Airbus & Boeing total aircraft orders by region: Up to Jul-08 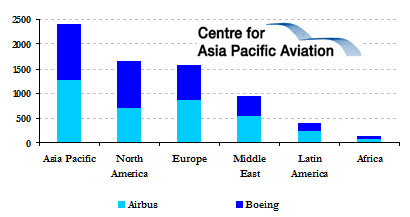 But as a proportion of widebody order books - an indicator of future international market dominance - Middle East carriers account for 25% of the total, with 524 orders (led by Emirates, Etihad and Qatar Airways), against 763 orders for the entire Asia Pacific region - and significantly more than Europe or North America. 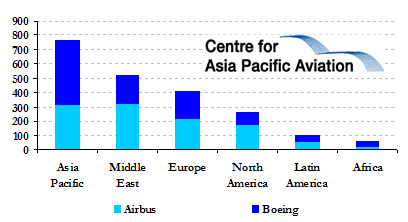 Traffic and load factor performances may fluctuate from month to month - but they form part of major strategic changes that are washing through the airline industry.