Singapore Airlines announced a raft of schedule changes in the Northern Winter period (31-Oct-2010 to 26-Mar-2011), which will result in higher frequency on selected routes, in response to “further growth in demand for travel.”

* Frequency will vary depending on the month of operation.
# SQ490/491 currently operates the Singapore – Dubai – Istanbul route. From Northern Winter, Dubai and
Istanbul will be delinked, with the service operating non-stop to Istanbul. New flight, SQ 494/495, will terminate at Dubai.
Source: Singapore Airlines

Also going daily, as previously announced, will be Singapore-Munich-Manchester, up from five times a week, while Singapore-Incheon frequency will rise from 18 to 21 per week. Additional services will also operate to Osaka, in addition to the current daily service between both cities, while Tokyo Haneda will join the SIA network from 31-Oct-2010 with twice-daily frequency, as previously announced.

SIA is also increasing capacity to Australia with a second daily A380 service on the Singapore-Sydney route. The second 471-seat A380 service, SQ231/222, will replace 278-seat B777-300ER equipment on the route. Total Singapore-Sydney frequency will be unchanged at four flights per day.

A 16-Jul-2010 CAPA report noted, “The question is how much longer SIA will keep the shackles on capacity in the face of now considerable market share losses to traditional rivals and emerging threats in the Middle East. The airline has stated it will keep capacity growth this financial year at low single-digit levels – but a change in course is not out of the question if SIA becomes satisfied with its yield levels. After all, they have bounced back more quickly than anyone expected”. 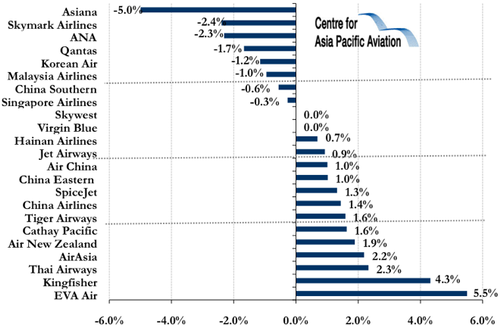