The past decade has revealed a shift in the balance of power as emerging markets rapidly catch up with established regions in terms of size, according to OAG. The mainstay of the decade’s expansion has been the development of LCCs fragmenting the hub system, as well as the Middle Eastern hub carriers rapidly developing new transfer markets between Europe, Africa and Asia.

The emergent market regions have also been the major drivers of capacity growth with huge aircraft orders translating into increased schedules in these markets. This has been the case in Asia, with the Chinese market expected to become larger than the total North American market within the decade.

Global capacity grows by 25% over past decade

According to OAG, global capacity has grown by 25% over the past decade since 2001 while the number of services has increased by 8%, resulting in the average capacity per movement increasing to just over 125 seats, a 16% increase since 2001. 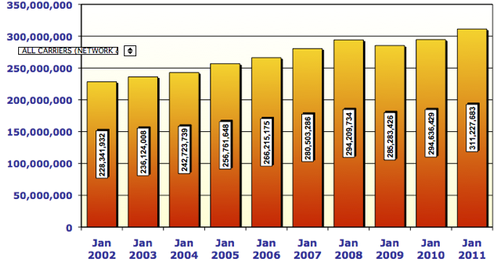 LCCs grow from 8% to 23% of capacity over past decade

Low cost scheduled airlines now account for 23% of all capacity compared to only 8% of seats in 2001.

In the past decade, capacity growth in this market segment has been steady with a 1.5% increase in market share p/a.  Expectations are that this segment will continue to grow in coming years with new entrants, and as currently regulated market environments open to this sector.  India, China, Japan, Russia and most of Africa remain relatively immature LCC markets. 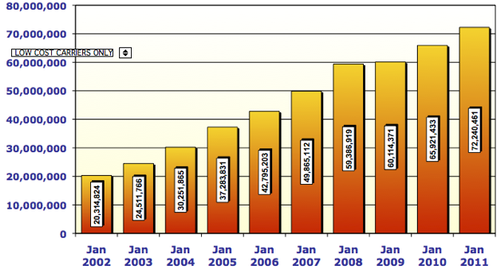 At a regional market level, large growth has occurred in China (excluding Hong Kong and Macau) where domestic capacity has increased by 240% since Jan-2001 with growth of 8% in 2010. 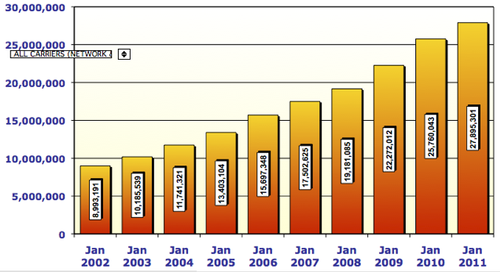 The average aircraft capacity in the Chinese domestic market has remained unchanged at around the 150% mark reflecting a market where “frequency of operation, rather than size of aircraft, has been the major catalyst of market development”.  The A320 and B737-800 remain the standard aircraft for most routes in China, prompting OAG to comment that “there is little role for the regional jet in China”.

Air service within Asia continues to lead all regions of the world with nearly a third of all scheduled airline seats in Jan-2011, according to OAG. Scheduled seats within this region increased 9% in Jan-2011 to more than 93 million seats while the number of flights increased 9%. Seat capacity to/ from Asia increased 11% to 15.2 million and frequency increased 12%. 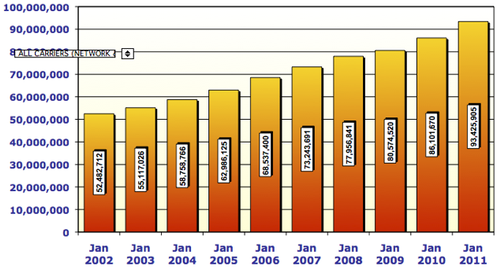 Large growth has been recorded in Indonesia, where domestic capacity has grown 336% since Jan-2001, and 41% in the last year, as a mix of new carriers and LCCs respond to the growing demand for air travel across the country.

Another domestic growth market and current industry "hot-spot" is Vietnam where domestic capacity has increased 31%, year-over-year, and a staggering 455% since Jan-2001. In absolute size, however, the market remains small with 1.3 million seats but is clearly one to watch in the next few years, especially with Vietnam Airlines’ SkyTeam membership and the delivery of 63 aircraft.

The development of the three major hub airports in the Middle East - Dubai, Abu Dhabi and Doha – has also been a marked development over the past decade. 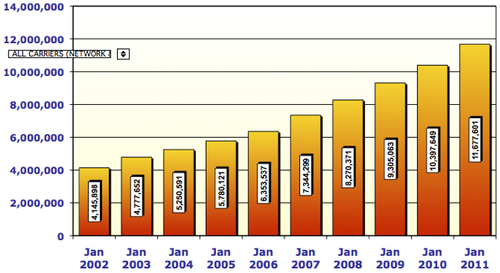 Africa is also reporting very strong year-on-year growth with capacity to/from the region increasing 32% over the past two years, albeit off a small base. The region has become a notable growth market, developing potential for sustainable growth in the coming years. Up-gauging and re-fleeting have played a part in the trend with B777 and A330 deliveries throughout the continent. 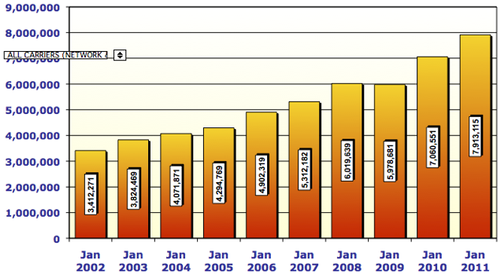 By means of contrast to these growth markets, capacity in North America has declined 20% since Jan-2001. Average capacity per aircraft staying constant during that time, with an average 92 seats per movement.  In real terms, the number of scheduled daily services within North America has declined from 32,740 a day in Jan-2001, to 26,094 in Jan-2011, a reduction of 20%. 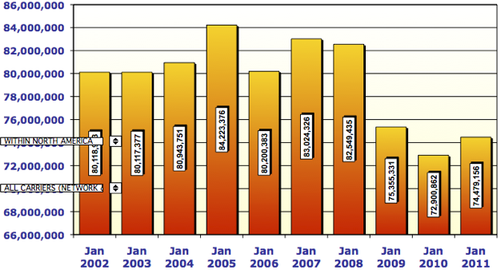 In Jan-2011, seat capacity within North America grew 2% in Jan-2011 to 74.5 million with the number of flights increased by just 1%. Travel to/from North America increased 3% to 17.4 million seats although the change in flights was negligible.

However, changes are anticipated in the third and fourth largest airports, London Heathrow and Haneda, with the Japanese airport claiming third place at some point in 2011, as Haneda develops its international network. The capacity gap between these two airports in Jan-2011 is 42,593, which at the current average capacity per movement at Haneda, means an additional six flights a day will move the airport above London Heathrow. Ironically some of that required capacity growth will come in the form of a new British Airways service from Heathrow to Haneda commencing in Mar-2011.

Given the overall growth in domestic capacity in Indonesia, the 28% growth in capacity at Jakarta International Airport supports the wider market picture and reflects the continuing expansion of carriers such as Garuda.

Scheduled capacity growth in Moscow is also “very positive” according to OAG. Moscow Domodedovo leads the way with a 21% increase in capacity, or a total of 2.4 million seats in Jan-2011. This equates to 78,176 seats per day in Jan-2011 compared with only 9916 a day in Jan-2001. Contributing to this growth is the rebranding of the airport, which has triggered a change in power balance between Sheremetyvo and Domodedovo, Star Alliance and oneworld presence at Domodedovo and a range of locally based airlines.  In the last decade Domodedovo Airport has seen its scheduled capacity share of the Moscow market rise from 16% in Jan-2001 to 45% in Jan-2011, securing a market leader position.

In 2010, Star Alliance was the global leader accounting for 49% of all scheduled seats offered via the alliance structures, compared with the Skyteam alliance with a 29% share and oneworld with a 22% share.

During the last year, Star has expanded with five new members, the most notable of which was TAM, which is six times larger than any of the other new members in 2010. OAG anticipates the SkyTeam figures for this time next year, when the membership will include China Eastern including offshoot, Shanghai Airlines, Vietnam Airlines, Garuda, Taiwan’s China Air Lines, Aerolineas Argentinas and Tarom.  Additional carriers are expected to join the alliance in 2011.

Meanwhile, oneworld is also expanding with airberlin and S7 joining the carrier. The struggle for the LAN/TAM account may also be resolved in 2011, as the dynamic South American economies continue to grow strongly, and when combined with the recent US-Brazilian open skies agreement, suggests a further period of positive capacity development for the airline alliances.