Shares in Shanghai Airport surged 7.3% yesterday, lifted by a jump in airline trading in Shanghai, while the Shanghai Composite rose 0.4%.

On the Shanghai market, China Eastern Airlines gained 5.1% (the most since Nov-2008) as the carrier announced it expects to return to profitability in 2009, with a forecast net profit of USD2.0 billion, due to favourable fuel hedging from lower fuel costs and a recovery in the local aviation industry.

Meanwhile, Air China Ltd added 4.6% in Shanghai trading to CNY11.09 (the highest close since Jun-2008). The carrier announced it would receive CNY1.5 billion (USD219.6 million) in grants from the Ministry of Finance, which will support its proposed acquisition of the stake it did not already own in Air China Cargo Co Ltd (from Beijing Airport). Shares in Beijing Airport lost 1.8% yesterday.

Conditioned upon completion of the merger, DSA shareholders/BDR holders shall also receive from DSA an extraordinary cash dividend of USD4.71 per DSA share/BDR. It is expected that DSA and DAG will finalise the other terms and conditions of the merger agreement in the coming weeks.

The rationale for the merger is to establish a simplified corporate structure of Dufry Group with a unified shareholder base, which can "participate in a balanced and diversified concession portfolio with an exposure of approximately 60% to emerging markets and a proven track record of delivering growth". Furthermore, the transaction will increase the Group’s strategic flexibility to pursue growth opportunities globally and in South America.

In Europe, Aeroports de Paris’ (AdP) shares up were 0.4%, upon the release of the release of the airport operator’s traffic report for Paris-Charles de Gaulle and Paris-Orly airports. Between the two airports, passenger traffic dipped 2.5% year-on-year to 6.4 million in Dec-2009, while traffic for the 12 months ended 31-Dec-2009 was down 4.7% year-on-year. Details of the full report is published in today’s edition of Airport Business Daily

Click here for more information on Airport Business Daily - your one-stop shop for strategic airport news from around the world. 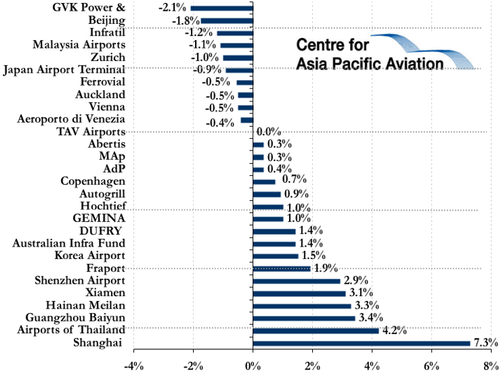