The Chinese stock market continued its upward rally for the eighth consecutive day on Thursday, with the Shanghai Composite Index rising 0.6% to reach the highest index close in the past two months. Meanwhile, the Hang Seng Index gained less than 0.1%, while the Hang Seng China Enterprises Index, which tracks H shares of Chinese companies, fell 0.3%.

The move also foreshadows China Eastern/Shanghai Airlines' further cooperation with SkyTeam counterpart, China Southern. As previously noted by CAPA, the two could provide an effective foil to the aggressively expanding Air China, which is continuing its domestic acquisition spree and strengthening ties with Cathay Pacific.

Attention now turns to Air China (Star Alliance) and Cathay Pacific/Dragonair (oneworld) and whether they will align under one alliance. oneworld currently does not have a Mainland Chinese member, although Cathay/Dragonair provide effective coverage over Hong Kong.

Shares in China Southern Airlines rose to the highest point in almost three months in Hong Kong trading, gaining 3.6% yesterday to close at HKD3.77, after the carrier stated it expects first half net profit to increase by “over 5,000%” from the net profit of CNY38 million (USD5.6 million) in 1H2009. The carrier’s Shanghai-listed shares added 0.3% to close at CNY7.39 yesterday.

The carrier explained: “During the period, the demand for aviation and transportation services increased gradually as a result of rapid domestic economic rebound. The company actively boosted its revenue level by taking advantage of such improved market and achieved the steady growth of its operational efficiency. Further, the net profit attributable to the equity holders of the company for the first half of 2010 was substantially increased, due to the completion of the disposal of its equity interest in MTU Maintenance Zhuhai Co Ltd and a lower base figure for the corresponding period in 2009”. 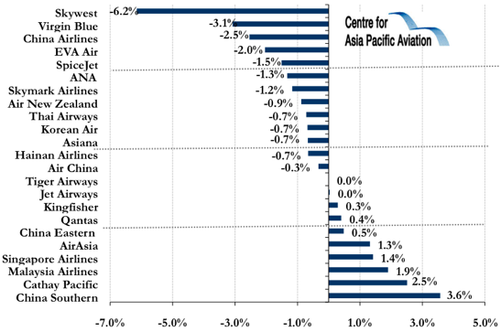