Global airport passenger traffic showed positive signs of improvement in Sep-2009, with the stabilisation trend of the past two months being maintained in the month, according to Airports Council International (ACI).

According to ACI World Director General, Angela Gittens, “the downward trend began to ease in the second quarter and now in the fourth quarter we are seeing growth. We are not just seeing “less worse” results, but some clear signs of new growth in selected domestic markets”.

She added, “the flattening of the trend curve is a good sign. It may signal a sustained trend since domestic traffic is often a precursor to international traffic recovery.” 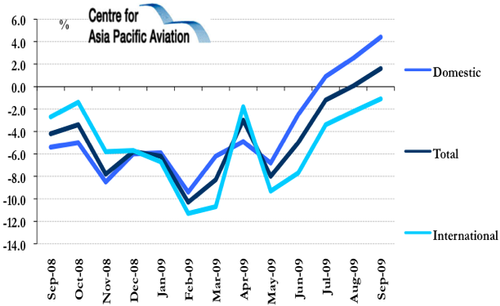 International passenger traffic, however, remained depressed in the month, down 1.1% year-on-year, although this reduction is an improvement over the 2.2% decline in Aug-2009, and the 3.4% decline in Jul-2009.

ACI stated domestic traffic results in China, Brazil and India are “leading the global upswing”, with the Asia Pacific and Latin America-Caribbean regions dominating the Sep-2009 results, with increases in domestic traffic of 12.5% and 16.2%, respectively.

ACI added that a number of major and emerging economies expanded or returned to GDP growth in 3Q2009, which is driving the improved results, commenting that “economic stimulus programmes, stiff domestic competition and low fares are contributing to the strong results in Brazil and China”.

ACI added that the domestic North American results were “promising”, with international declines also less depressed in the month (-3%). 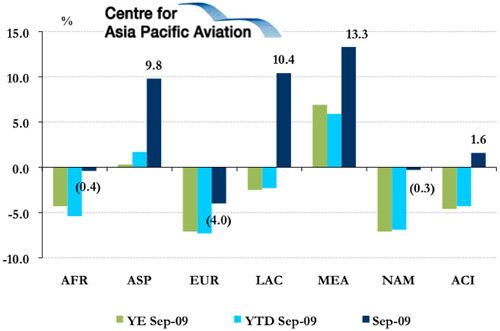 “Moderate” declines in freight a “pleasant surprise”, could point to a quicker-than-expected recovery

According to ACI, global freight was down 2.9% in Sep-2009, representing an “accelerating upward trend”, driven by a 3.7% improvement in domestic results, which was outpaced by a 5.8% decline in international freight. 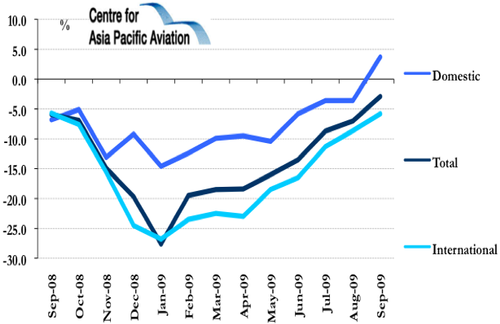 ACI added that the year-to-date slump in total freight (down 13.8% year-on-year) has been much deeper than the passenger decline, “so seeing these moderate declines comes as a pleasant surprise and may point to a quicker recovery in the freight sector than previously thought”. Again, however, these results are against negatives in the preceding year, inflating the rise.

Drivers for a potential recovery again are centered on the Asia-Pacific and Latin America-Caribbean regions. During Sep-2009, Asia-Pacific total freight performance showed a “stunning” recovery from a 28% reduction to an increase of 1.3% in Sep-2009.  The Asia Pacific was also the only region reporting positive domestic results (+16.3%) in the month. 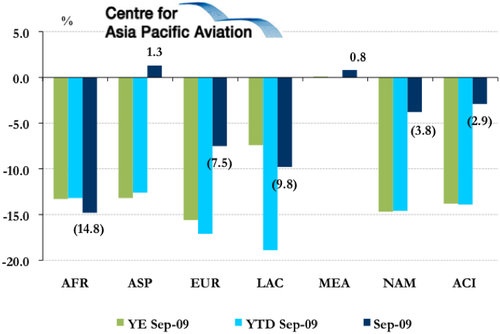 Looking forward, ACI stated it forecasts a conservative growth of 2.5% in 2010, with the domestic markets to continue taking the lead (the Council has previously stated it expects global annual declines in 2009 of between -3% to -4%).

Rationalising the estimate, ACI added that “industry data illustrates that over the past 30 years airport traffic recovered relatively quickly from the impact of economic cycles and extraordinary events. In a prolonged economic downturn, the rebound may be less immediate”.