European airline shares were down on Tuesday (07-Sep-2010), following disappointing traffic results and a decline in wider markets. The banking sector pushed markets lower for the day, after The Wall Street Journal stated bank stress tests did not provide a clear picture of government debt holdings among major banks.

SAS Group (-1.2%) declined after reporting a 3.4% year-on-year fall in Scandinavian Airlines’ yield for Jul-2010. However, revenue per ASK (RASK) was up 0.7% for the month, due to improved load factor.

The group stated the RASK outlook for Aug-2010 is uncertain, while yield growth for the month is expected to be negative.

Meanwhile, the carrier reported improved traffic data for Aug-2010, with load factor up 2.0 ppts, to 78.2%. This included:

Air France KLM (-0.7%) slipped after reporting a slight decline in load factor and passenger numbers for Aug-2010. Load factor was down 0.3% for the month, as the decline in traffic (RPKs), down 1.2%, outweighed the reduction in capacity (ASKs), down 0.9%. Passenger numbers for the period were down 0.8%, to 6.5 million. The group attributed the decline to “slightly less dynamic” leisure traffic compared to Aug-2009.

More positively, the group stated RASK continued to improve for the month and was “well up” year-on-year, while forward bookings for the coming months showed a positive trend.

Elsewhere, Britiish Airways was one of the strongest gainers for the day, after UBS raised its price target for the carrier’s shares from GBP 295 pence to GBP 335 pence, stating synergies from its merger with Iberia will boost its performance. Iberia (+3.0%) also climbed as a result. 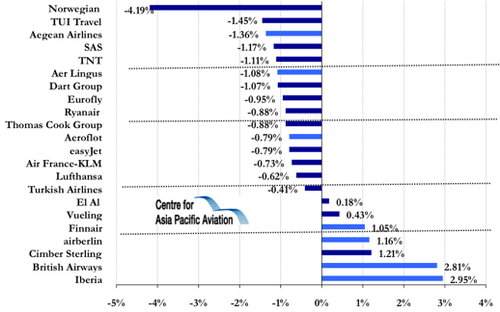