Shares in SAS surged 8.7% yesterday, upon the release of the Group’s financial results for the three months ended 30-Sep-2009. The Group improved at the operating and net profit levels, despite pressure on yields and revenue reduction.

SAS reports an operating profit of EUR24.9 million, which improved 38.5% year-on-year for the three months ended 30-Sep-2009, as operating costs declined 15.8% year-on-year to EUR986.6 million in the period. The Group generated a net profit of EUR14.6 million in the quarter, a turnaround from the EUR191.1 million net loss reported in the previously corresponding period.

Iberia shares dipped 1.5% yesterday as the carrier announced it would cancel some services on 10-Nov-2009 and 11-Nov-2009, due to strike action called by the CTA and SITCPLIA cabin attendants unions. The carrier will not be able to cover the minimum services requirement established by Spanish authorities.

Iberia services operated by Vueling, Iberia Regional/Air Nostrum and other airlines using Iberia codes, will not be affected. Flights to and from the Canary Islands and the Balearic Islands will also operate normally, as will most of Iberia’s long-haul flights. Shares in Vueling declined 1.6% yesterday.

British Airways, another carrier faced with industrial unrest, announced the Unite union, representing 14,000 BA cabin crew, confirmed its intention to conduct a strike vote on 14-Dec-2009. This latest move comes in spite of a UK High Court ruling that the Unite and BA dispute must go to a full trial on 01-Feb-2010. The union will “unwillingly” accept changes, which will reduce cabin crew from 15 to 14 on long-haul services by removing a senior purser. The union failed to obtain a court order blocking the decision. Shares in British Airways were down 2.9% yesterday. 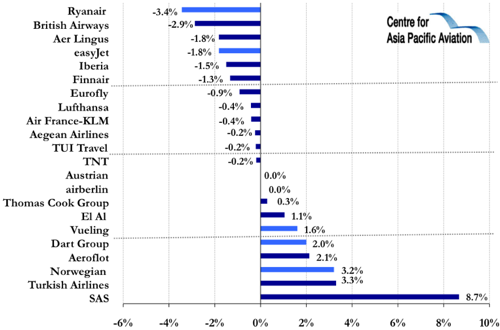