Once again SAS (+4.8%) benefited on 16-Dec-08 from continued speculation about Lufthansa acquiring all or part of the Scandinavian flag carrier.

Finnair (+3.2%) meanwhile rose for quite different reasons, as it announced it would require cabin crew to rotate and take holidays in the Spring, in order to reduce crew costs in that way, rather than merely reducing staff numbers. Early retirement and layoffs of temporary staff would complete the changes, leading to an expected EUR 25 million in savings.

And Aer Lingus (-4.2%) stock fell back, as Ryanair's bid to buy it appeared to be losing traction with the key government shareholder. 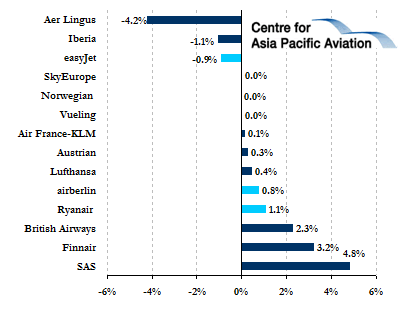