European carriers’ stocks were mixed on Tuesday (09-Feb-2010), with some carriers pushed down by the release of weak earnings and traffic reports.

In major markets, UK’s FTSE (+0.4%), France’s CAC (-0.2%) and Germany’s DAX (-0.5%) were all up at the end of trading. European markets were generally higher, as the banking sector recovered ground on hopes the EU will provide some financial assistance to some struggling eurozone countries.

SAS (-28.1%) shares fell their most in 13 years, following the announcement during trading of a wider than expected loss and plans to launch a rights issue.

President & CEO, Mats Jansson attributed the weak results to a “significant decline in Business travel”, due to the global financial downturn, but the “falling trend in demand leveled out during the fourth quarter and started to stabilise slightly, and such a scenario is usually followed by a more stable yield trend”.

However, Mr Jansson admitted “uncertainty remains regarding the competitive situation, the USD exchange-rate trend and the price of jet fuel”.

Standard & Poor’s analysts stated the financial results are “beyond belief”, consequently downgrading its rating of the stock from ‘Hold’ to ‘Sell’, and price target from SEK4.20 to SEK3.00.

SAS now plans to implement additional cost savings initiatives of EUR198 million (SEK2.0 billion) and measures to strengthen the balance sheet including debt maturity extensions and a proposed rights issue of approximately EUR495.6 million (SEK5 billion). The issue is supported by SAS' largest shareholders and a consortium of underwriting banks, subject to, amongst other things, the refinancing of the bonds and final agreement with pilots and cabin unions.

Orion Securities analyst, Aleksandr Solovjov, told Bloomberg that many were expecting another rights issue by the carrier, but were not expecting it so soon.

Elsewhere, British Airways (+3.1%) gained following reports it is considering dropping its Business class on a number of short-haul sectors, stating passengers have either downsized to Economy or moved to LCCs. London Gatwick Airport and regional gateways are likely to be affected by the change, with the carrier currently planning to strip premium seats from aircraft operating from those bases. 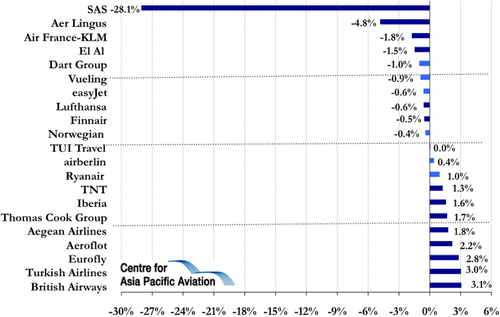