A number of European markets were closed on Monday (03-May-2010) for the Labour Day public holiday. Of those that did trade, the majority of carriers were down at the end of the session.

Wider markets followed the lead of US markets, as the Dow (+1.3%) gained on the announcement of the merger of United Airlines and Continental Airlines. The gains were despite lingering concerns over the proposed EUR110 billion bailout package for Greece and whether it will be enough to help the country. Oil prices rose 0.1% to USD86.19.

SAS’ (-3.9%) shares took the day’s biggest fall, despite news its discounted USD688 million rights issue was oversubscribed by 38%. SAS launched the rights issue at a heavily discounted price in Apr-2010, as it pushes through a sweeping programme of cost cuts worth USD1.1 billion. CEO, Mats Jansson, stated the issue will strengthen its financial and strategic flexibility.

Finnair (+1.2%) was the day’s biggest gainer, as the Helsinki Stock Exchange (+0.1%) rose slightly. Air France (+1.1%) was also up. The carrier announced during trading that it has launched its new La Première cabin, available on 49 aircraft to 29 destinations. The service includes staff accompaniment at the airport and access to the La Première lounge.

Meanwhile, Aeroflot CEO, Vitaly Saveliev, stated during trading that he believes the carrier will be able to effectively shed the negative stereotype associated with its Soviet-era history and passengers will appreciate the carrier’s improved service levels. Mr Saveliev noted the carrier's first ranking for customer service among European carriers in the SkyTeam alliance is proof of its improving product.

Mr Saveliev also commented that the carrier is not concerned over the debt of the six Russian carriers it is soon to absorb. Aeroflot plans to restructure some of the debt. The CEO added the six airlines will serve different markets, with one to become a charter carrier and another to potentially be transformed in an LCC. The carriers are expected to assist Aeroflot to reach its goal of transporting 20 million passengers p/a in 2011. 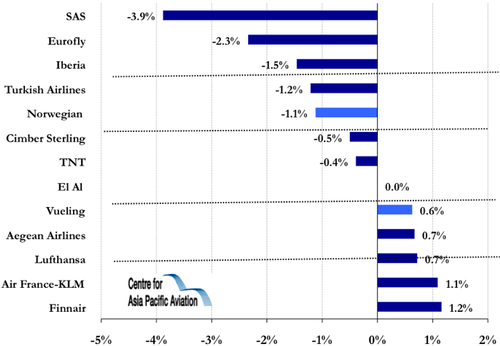