SAS (-7.5%) led European airline stocks lower on Wednesday (10-Nov-2010) after reporting a net loss of EUR113.3 million for the three months ended 30-Sep-2010, compared with a profit of EUR16.4 million in the previous corresponding period. The result was on a 3.5% year-on-year decline in revenue to EUR1.2 billion.

According to Bloomberg, analysts have on average expected SAS to report a profit of EUR30.5 million. The carrier suffered its biggest share decline since 24-Aug-2010 as a result.

SAS also plummeted on news the day before that the European Commission has fined the airline EUR70.2 million for taking part in a global cargo cartel. SAS stated late on 10-Nov-2010 it would include the fine in its 3Q2010 results, contributing to the loss. The carrier was also ordered to pay Norwegian Air Shuttle (-3.6%) EUR19.8 million during the quarter for corporate espionage.

More positively, SAS CEO John Dueholm stated the carrier’s cost savings programme is proceeding according to plan and the remaining activities have been identified and secured at a local level in the organisation. The remaining earnings effect from the programme is SEK2.9 billion (EUR312.7 million).

British Airways (-2.0%) was also down following news that two unions have refused to recommend a British Airways management offer intended to solve a long-running industrial dispute between British Airways and its cabin crew. British Airlines Stewards and Stewardesses Association (BASSA), a unit branch of the Transport and General Worker's Union (T&GWU), described parts of the agreement as being "a step too far" including demands that all union legal action on the dispute be dropped. BASSA, which represents 10,000 crew members, added that it still intended to go ahead with a consultative ballot on the offer. Its sister branch, Cabin Crew 89, also rejected the offer. 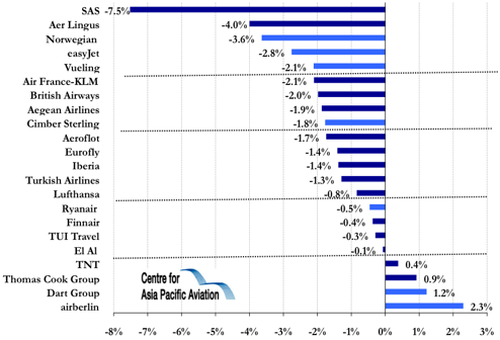