LCC capacity share in Denmark grew dramatically in both the domestic and international segments from 2005 to 2008, but has stabilised in 2009 (domestic) and slipped back (international) in 2009. For all the contributory factors, the demise in 2008 of Sterling, Denmark’s own LCC, figures highly.

Despite the many difficulties it faces presently, or has faced, (tough local competition, harsh market conditions, some ineffective subsidiaries, revenues down by 15% in the last reported quarter, payroll cuts of 20% etc) pan-national carrier Scandinavian Airlines System (SAS) remains the dominant airline at Copenhagen, one of its two main hubs, along with Stockholm Arlanda (plus the more peripheral Oslo Gardermoen). In w/c 07-Sep-09 SAS had 45% of capacity there (see Chart 1), with the nearest challenger, the LCC Norwegian Air Shuttle, lagging well behind with less than 10% but growing fast.

Denmark, a small country of several islands but one that is now well connected by motorways (including key bridges and tunnels) and rail services, relies heavily on the capital city airport for its air transport. In 2008 Copenhagen (Kastrup) Airport (CPH) handled 21.5 million passengers and was the 17th busiest in Europe. 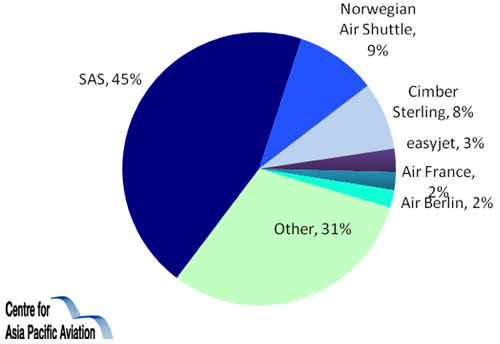 Denmark’s other main airports are at Aalborg, Aarhus, Bornholm and Billund (home to the original Legoland), individually hosting between 190,000 and 1,980,000 (Billund) passengers in 2008.

Before the demise of Sterling, whose routes (10% of the total) were surprisingly quickly taken over by other airlines, LCCs accounted for 17.3% of total weekly seats at Copenhagen. This was well below the 25-30% average market share LCCs claim across Europe. (See Chart 2). 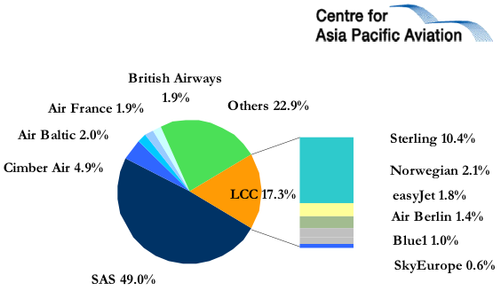 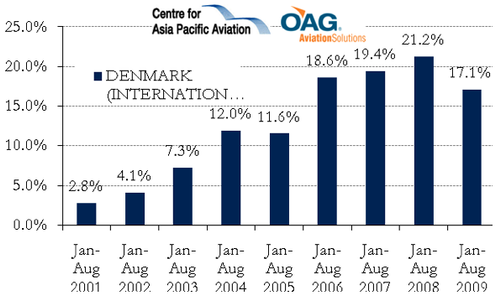 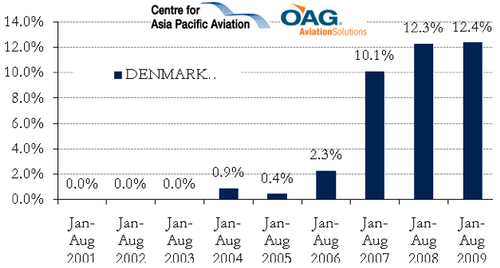 Apart from the international and intercontinental hub that SAS operates there, CPH is also a main hub for Norwegian, for the Dutch LCC transavia.com and for Cimber Sterling. Transavia.com, the old Transavia Airlines that was originally a charter airline with an LCC subsidiary (Basiq Air) and which is now part of Air France-KLM, chose Copenhagen as its third base after Amsterdam and Rotterdam.

Cimber Sterling is another airline to have been restyled. The old Cimber Air, a regional carrier, acquired parts of Sterling Airlines (q.v.) in Dec-08, after Sterling had filed for bankruptcy. Specifically, it acquired the AOC, slots, brand and website (www.sterling.com) and aircraft leases were negotiated with the owners. It has become a strange hybrid-airline-in-transition, remaining true to its regional airline roots, offering city breaks and with a very wide range of fares (e.g. Prague from DKK295 return while Aberdeen – a business route – is DKK796) but with reported long-term aspirations to  re-establish Sterling as a northern European airline. In the meantime it has to juggle a fleet that includes ATR42 and 72 versions, 15 Bombardier CRJ-200s and five B737-700s. The CRJ-200s are also used for charter services. In the immediate aftermath of Sterling’s collapse it opened up 16 new routes from CPH.

The category ‘Other’ in Chart 1 is quite large, emphasising the grip SAS still has at Denmark and the support provided by Norwegian and Cimber Sterling in particular. Those other airlines include LCCs such as Air Berlin, easyJet (six routes), Germanwings, Iceland Express, Blue1 and Jettime (Malta). But their collective contribution is relatively small, with only easyJet having a substantial presence.

The other airline to have benefitted from Sterling’s demise is Norwegian Air Shuttle, which is expanding on several fronts. While Cimber Sterling is the second largest carrier at CPH after SAS with 25 routes, Norwegian is not far behind with 23. (Transavia.com is fourth with 18). Norwegian’s route network includes Dubai, which commences on 31-Oct-09, supplementing its existing seasonal route from Oslo to Dubai. Quietly, Norwegian, which already operates some routes that have greater distance than the typical European LCC flight, is moving into ‘long haul LCC’ territory’ where only AirAsia X and Jetstar currently prevails. Also on the quiet Norwegian has grown to be not only the second largest airline in Scandinavia but also Europe’s fifth largest LCC.

In a statement on 17-Sep-09 Norwegian said it had “big plans to expand at Copenhagen” as its ‘transfer hub’, another indication of an LCC shifting away from one of the operating principles of budget airlines. It now plans to purchase 10 new aircraft each year and base them there. Copenhagen Airport has hitherto been pleased with the expansion of Norwegian’s route network because the enhanced programme included four routes that had not been served out of Copenhagen before. However, CPH management has indicated that Norwegian Air’s new strategy requires that it renegotiate the original offer it made to the airline.

Irrespective of the airline type, hub traffic is critical to CPH. The total population of the six Nordic countries (Denmark, Sweden, Norway, Finland, Iceland and the Faroe islands) is only just over 23 million. CPH is already in competition with Stockholm’s Arlanda airport and both Finland and Iceland have hubs of their own, serving North American and Asian markets respectively. In May-09 CPH held an interline conference for all the airlines that operate there. The purpose of the conference was to create a forum where airlines can meet and establish new business relations – and develop CPH’s potential as a transfer airport.

When Sterling collapsed, it came shortly after an investor group made up of former airport employees had prepared a plan for a new terminal (Terminal A) on the eastern side of Copenhagen Airport to attract new budget routes.

The new terminal might have been completed by the spring of 2010 and the goal was that passengers were to be able to transfer from their cars straight to the aircraft in 20 minutes. It was planned to compete directly with existing terminals in Copenhagen Airport. Presently, there are three terminals: T1 is for domestic traffic including LCCs and internationally LCCs are split between T2 and T3.
The estimated cost was approximately EUR50 million to build the new terminal and the investors were supported by Sterling.

Copenhagen Airport had also looked into the possibilities of establishing budget facilities, after facing criticism from airlines such as easyJet that they were inadequate. Ultimately the airport management denied the investors permission to build the terminal and the basis that it conflicted with their own Master Plan, and opted instead to construct their own DKR200 million (USD26 million) terminal, which is to be known as CPH Swift. The terminal will have an annual capacity of six million passengers who can access aircraft through six gates. Airlines must have a 30-minute turnaround at the new terminal, at least 90% of the passengers must check in online, through their cell phones or a self-service kiosk. Transfer to other flights is not possible.

Copenhagen Airport management has signed a long-term agreement with the Danish Civil Aviation Administration on its airport charges. The majority of the approximately 60 airlines using the airport have approved the agreement, under which the structure of charges will be changed as of 01-Oct-09, with the charges subsequently locked for the following 18 months. Thereafter, the charges will be increased 1% faster per annum than the annual increase in the Danish Consumer Price Index (CPI) for the next four years. Also under the agreement, CPH will invest more than EUR350 million in infrastructure expansion and improvements over the contract period. However, when the LCT opens, its charges will be negotiated separately.

LCCs also operate to and from other Danish airports. easyJet only uses CPH, but Ryanair has services to Aarhus and Billund, where it has nine routes. All LCC services are in Table 1, below.