LCCs are a thorn in the eye of all established network carriers, and the environment is no different in Scandinavia where SAS Group’s historic market share has been slowly crumbling off to the benefit predominantly of Norwegian Air Shuttle, which relentlessly has built a closely-knit network from bases in Norway, Sweden and Denmark. As a national airline partially owned by the governments of Sweden, Denmark and Norway (with a 21.4%, 14.3% and 14.3% shareholding respectively), SAS for too long has been a bystander, hoping that its ownership structure and lobbying would be sufficient to fence off the expansion of Norwegian and other budget airlines.

Now SAS is trying to fight back and it wants to win over the independent leisure travelers who flock to the no-frills operators. As part of its new strategic platform 4Excellence, which was outlined by the company’s new president and CEO Rickard Gustafson in Sep-2011, the airline is expanding its offerings to strengthen its market share within the leisure travel segment.

Mr Gustafson reckons that a large proportion of the growth in the airline industry will come from leisure passengers “and this is naturally something SAS wants to share in”.

The routes also contribute to greater aircraft utilisation during periods of low demand in business travel. During the presentation of SAS Group’s 2Q2012 results with analysts, Mr Gustafson noted that SAS is increasing capacity by 3% on short-haul routes in 2012 using one less aircraft.

A touch of orange and a bit more service

Mr Gustafson describes SAS’ push to win back a larger share of the leisure and price sensitive point-to-point travel segment as “an offensive initiative that will create profitable growth that benefits both the customer and SAS”.

As part of this “offensive initiative” and its 4Excellence strategy, which aims to achieve excellence in four core areas by 2015 - Commercial Excellence, Sales Excellence, Operational Excellence and People Excellence - SAS has brought back some basic on-board service offerings. On 30-Jan-2012 the airline reintroduced complimentary coffee and tea on all European routes, including domestic services in Denmark, Norway and Sweden, as well as free newspapers at the gate. SAS said that complimentary coffee and tea in economy is one of the most asked for products by its customers and said it was “very pleased to once again be able to offer this service”.

In Jan-2012 SAS and its subsidiary Blue1 started introducing - at least initially - free onboard Wifi and the service will be gradually integrated throughout the fleet. The move is in response to archrival Norwegian, which has been offering free Wifi for quite some time.

While re-emphasising its full-service approach, SAS is borrowing some characteristics from its low-cost competitors, such as using orange in its low-fare promotional campaigns. The colour orange has featured prominently in easyJet's branding since its launch in 1995. 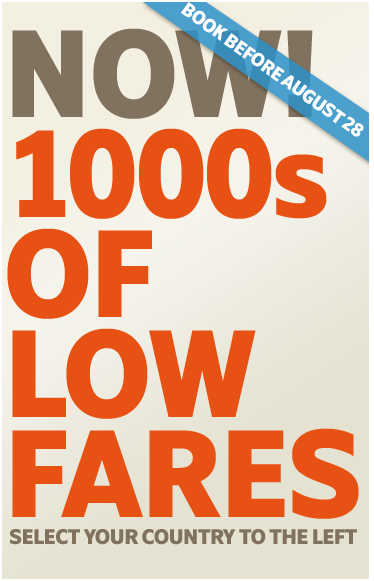 SAS Group has to step up its defence against low-cost carriers as the vast majority of its capacity is deployed on short and medium-haul routes. SAS is the group’s main airline and operates alongside the company’s regional carriers, Finland-based Blue1 and Wideroe in Norway.

See related article: Blue1 to become feeder for SAS' Copenhagen and Stockholm hubs in move against Finnair and Norwegian

SAS operates about 47% of its capacity in terms of seats on domestic routes and 88% of its international seat capacity is flown on routes to/from western Europe, according to schedules in Innovata for the week of 20-Aug-2012 to 26-Aug-2012. 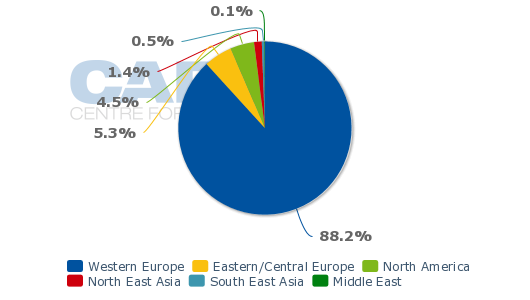 SAS’ network spans 92 scheduled passenger destinations, of which only eight are not in Europe. It operates some 2,075 flights per week to/from western Europe and 142 in central and eastern Europe, whereas as its Middle East, Asia and North America schedules are limited to about 80 weekly flights.

SAS flies to only four destinations in Asia, three in North America and one in the Middle East, Tel Aviv. SAS resumed flights from Copenhagen Kastrup Airport to Israel’s main airport on 04-Jun-2012. Currently the Tel Aviv flights operate twice a week with 141-seat A319 jets. The route was previously operated by Cimber Sterling, which ceased operations in May-2012.

SAS is still the single largest capacity provider in its three-country home market of Sweden, Norway and Denmark, but LCCs have gained a sizeable footprint in those three countries and focusing on leisure-oriented routes will increase SAS’ passenger numbers but lower its yield. Already in 2Q2012 currency adjusted yield at SAS (including Blue1) fell 2.7% year-over-year owing to the combined effect of the opening of a new intercontinental route to Shanghai Pudong on 01-Mar-2012 and introducing additional routes for leisure travellers.

In Sweden, SAS' share of international capacity has eroded sharply. It now produces 20% of all seats on international routes and 24% when factoring in the capacity flown by its regional subsidiary Blue1, according to schedules in Innovata for the week of 20-Aug-2012 to 26-Aug-2012. Ryanair has an approximate 17% share of international seat capacity, Norwegian Air Shuttle 15% and Wizz Air 4%. 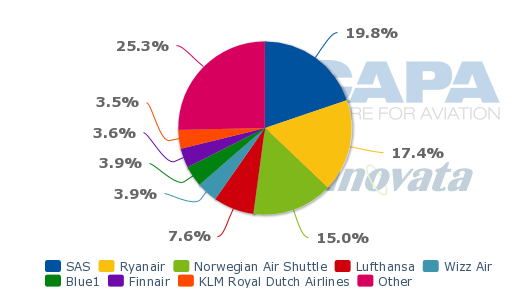 In Denmark, a small country with a largely international air transport market (only 7% of weekly seats is used on domestic routes), SAS still has a market leading position with an approximate 36% share of international seat capacity. Norwegian provides about 15% of the weekly seat capacity to/from the country, Ryanair 5% and easyJet 4%, based on data in Innovata for the week of 20-Aug-2012 to 26-Aug-2012.

SAS management must have breathed a sigh of relief when Ryanair did not take up the slots it had reserved to support the launch of a base at Copenhagen Airport in winter 2012. The Irish LCC was rumored to plan the opening of a base at Denmark’s leading airport and SAS’ main hub with up to 215 weekly flights to 34 destinations mainly in southern Europe and the British Isles from 28-Oct-2012, but according to check-in.dk Ryanair abandoned plans over a potential dispute with unions on the conditions of expatriate crew. 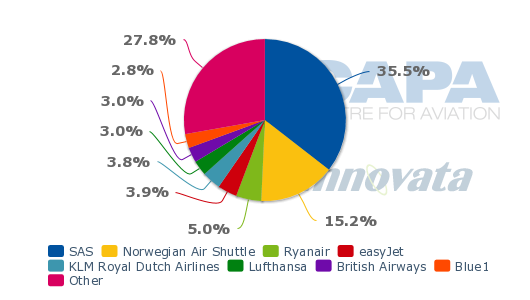 SAS’ position in Norway is markedly less comfortable. The airline’s mainline operations, combined with Wideroe’s operations, do provide 44% of system capacity in terms of seats, but on international routes Norwegian Air Shuttle is on par with the SAS/Wideroe combination. Ryanair flies 14% of the seats to/from the country and Wizz Air about 3%.

SAS competes with Norwegian on most of its largest routes

SAS operates a very dense intra-Scandinavian network but it meets its low-cost rival Norwegian Air Shuttle on all of its 10 largest domestic routes. 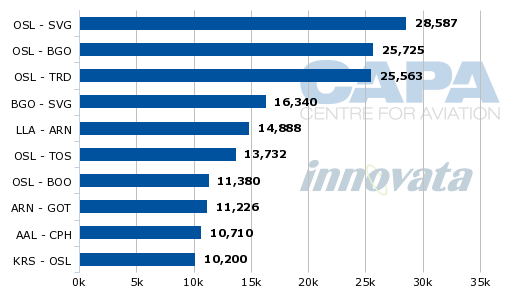 SAS also competes head-to-head with Norwegian on six of its largest international routes in terms of weekly seat capacity, although on all six of these routes SAS provides more seats. On two routes SAS has a monopoly position and on a further two routes the airline operates alongside its Star Alliance partner Lufthansa. 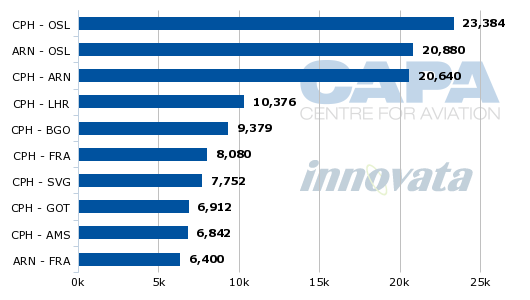 SAS expands leisure flying from all its bases

Competition is even more intense when factoring in Ryanair, which has a base serving 46 routes mostly to leisure destinations in central and south Europe at Stockholm Skavsta Airport. Wizz Air serves six central and eastern European airports from Stockholm Skavsta, which is located 100km south of Stockholm near the town of Nyköping. 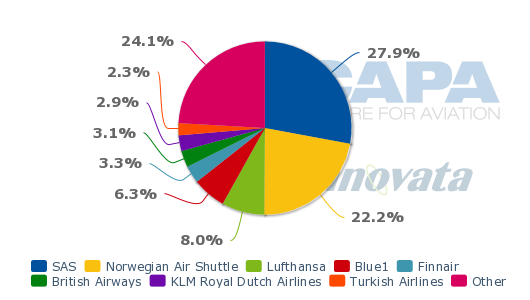 At Oslo Gardermoen Airport, SAS’ market leading position is history and Norwegian Air Shuttle now has a slightly higher share of capacity than its legacy counterpart. Norwegian serves 93 destinations from the airport and SAS just half of this, based on schedules in Innovata for the week of 20-Aug-2012 to 26-Aug-2012. SAS holds 41% share of system capacity in terms of seats and when including Wideroe and Norwegian 42%; however, the lead of Norwegian on international routes is unmistakable with a 36% share of weekly seats against 30% for SAS. The pair competes on the typical leisure destinations (they also compete on other routes) such as Alicante, Antalya, Barcelona, Gran Canaria, Dubrovnik, Malaga, Milan, Rome, Malaga, Spilt, Nice and Palma de Mallorca. 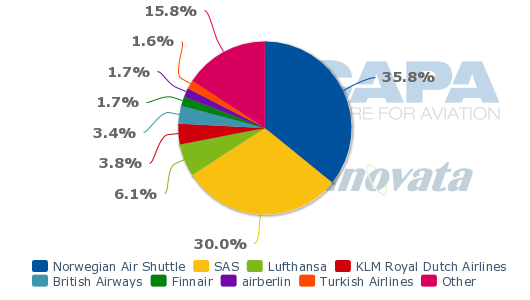 SAS is still the largest carrier at Copenhagen and offers about 231,670 seats per week from/to the airport. This gives it a 40% capacity share and when including the capacity flown by Blue1 this rises to 42%, whereas Norwegian is the second largest carrier in terms of weekly seat capacity with a much smaller 18% capacity share. easyJet has a 4% share of system capacity, according to schedules in Innovata for the week of 20-Aug-2012 to 26-Aug-2012. Norwegian operates to 55 destinations from the airport and SAS to 85, as they compete head-to-head on about 25 of these including all major leisure destinations. 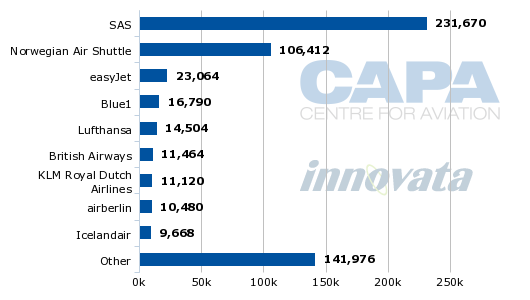 SAS’ goal to expand its footprint in the growing leisure market seems achievable. It is using its mainline platform to support the short and medium-haul network growth and productivity of its assets, a long-term challenge for the carrier, is increasing as a consequence. However, competition in this segment is fierce and its competitors have a lower unit cost, which can sustain lower yield.  SAS’  “offensive initiative” will only be a sustainable approach if it further simplifies and streamlines its operating culture and cost base.