WEEKLY REFLECTIONS WITH RON KUHLMANN & THE CENTRE. Recently CAPA published (10 August) an overview of diminishing international service at Los Angeles International Airport (LAX). Spurred on by the attention given to our larger neighbor to the south, this week we compare San Francisco International Airport (SFO) to LAX. As in most cases, the figures tell a story and mirror broader economic trends that have been afoot.

Much like cutting a slice of tundra to see climate trends, by looking at the most recent 10-year period, we can see the effects of 9/11 and SARS, the current economic mess and a general directional drift towards Asia. This Asian focus is perhaps not surprising given geography and current economic trends, but San Francisco has traditionally had a strong European heritage.

The decade covered includes a great many figures and, consequently, the charts are big. Chart 1, taken from data collected by SFO, tracks the international service history as recorded each June month for the past ten years.

The total passenger line aptly reflects economic trends that were observed. In 2000 airlines were riding high but the economic weakness evident even before 9/11 is already visible in figures for June 2001. There followed a two-year downward spiral through 2002/2003 with recovery and steady growth building until 2009.  The impact of the current global slowdown shows a passenger decline of 8%. While this pales in comparison to the roughly 19% drop between 2002 and 2003, few expect the kind of rebound that occurred in 2004 to be repeated in 2010.

A massive impact if United withdraws

San Francisco is well known as a United hub and is the carrier’s major focus point for Asian service; with its offer from SFO far exceeding the UA capacity available from LAX. It is, with its domestic connections, a massively important customer for SFO.

Nonetheless, US airlines operate only about one third of the frequencies from SFO to foreign destinations. Chart 2 shows the foreign flag share of operations over the period in question. While the percentage has declined very marginally from its 2001 high of 63%, the majority of flights continue to be provided by foreign airlines. If United were to further weaken, there could be some interesting ramifications, as already-strong foreign flags jockey for a more prominent role.

Unlike LAX, with international service provided by Delta and American as well, United’s longhaul competition at SFO from other US carriers is currently limited to a single DL/NW service to Tokyo so there is no heir-apparent in the case of additional United decline. It will be interesting to see if the new Continental/United ties will see CO increase its role at SFO.

In any case, the winter months will see the foreign flag proportion increased as United has announced discontinuation of its second daily services to London, Frankfurt and Tokyo for at least the winter timetable period, reducing UA’s overall international departures by 21 each week.

In Chart 3 we look at the distribution of traffic across markets as displayed by the percentage of travelers attributable to various sectors. Asia now claims the largest share of travelers but Europe has had a large share as well. Some of Europe's decline has come as a result of the loss of some European service juxtaposed against a rather constant supply of seats to Asia. As we will see in the last chart, in 2000 United operated a daily 777 to Paris and Swissair had a daily MD-11 to Zurich. The Europeans may bulk up again as economic conditions improve. Swiss International, Swissair’s successor, had planned to resume A343 flights in 2009 but has now postponed the service.

Volumes to the other three geographic regions have been far more consistent. While the addition of both Qantas and Air New Zealand to the SFO market doubled the sub-region’s share, it is still rather small. Noteworthy, however, by looking at Chart 1, is the fact that this market is the only one to show an increase June over June – OK, only 67 passengers but still…

Star alliance has the bulk of the European connectivity, with London, Frankfurt and Munich all being alliance on-line transfer points. Together they have a combined total of six widebodies for the summer, scheduled throughout the day. Skyteam has two, one each to Amsterdam and Paris and oneworld is limited to online connections at Heathrow with no AA codeshare on the current BA services. Just how an approval of AA/BA/IB antitrust immunity might affect the market is yet to be seen – even assuming it is granted.

Star carriers also predominate to Asia with United, Singapore, Asiana, ANA and Air New Zealand providing connections to multiple Asian destinations at a variety of gateways. Cathay, JAL and Qantas provide better representation for oneworld than is evident to Europe while Skyteam’s Korean and Delta/Northwest trail in the tally and have far fewer options, especially to points in South Asia and Oceana.

Percentage of total international SFO traffic by region: 2001 to 2009

Given the large Latin American population resident in Northern California, it is interesting that the passenger levels registered in 2000 to Mexico and Central America have yet to be repeated. One possible factor is that both Oakland and San Jose host Mexico flights, so the traffic may have grown but more diffusely across the area’s airports.

Finally, Chart 4 displays the actual services operated for the two summer timetables, 10 years apart, and again they reflect changes in the broader marketplace. For instance, especially to Canada there are a great many services operated with RJs. Calgary’s weekly service went from 14 737s to 42 RJ flights. Places like Edmonton and Victoria that required connections to reach in 2000 now have nonstop RJ operations.

Though a smaller metro population, Tokyo is served by the same number of flights as LAX. The offer between SFO and Hong Kong is larger than that from LAX, and with more incumbent carriers. LAX lost its Dublin link via Aer Lingus, while SFO has retained 4 weekly flights.

As is the case in virtually every US city, the European service is dominated by seats to London – both because of the strong O & D traffic as well as the vast number of connections that have traditionally been available. However, with Heathrow at or beyond capacity, other European hubs may see the benefit of Heathrow’s congestion.

If headed to Asia, Tokyo dominates but is also a congested hub (at least until next year). However, SFO travelers headed beyond Tokyo have frequent connections over both Hong Kong and Incheon; airports with capacity and broad connecting networks.

Even more so than LAX, SFO has scant direct access to South America. While LAN provides broader LAX service via Lima, no such direct intercontinental service is available at SFO. Nor has it been since the brief and ill-fated Varig foray many years ago. Whether or not the new South American players, TAM and LAN will move into the SFO market is yet to be seen.

Outlook SFO: On United we stand

United's international presence at SFO is very significant for the airport. 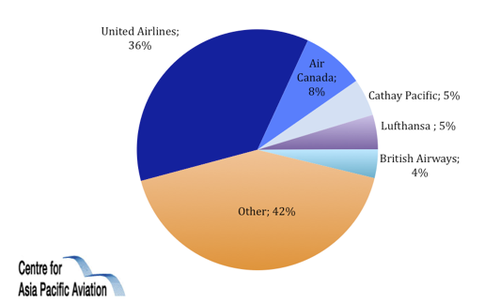 And, as much of the international traffic is connecting through the airport, the domestic flow-on, in terms of passenger throughput and domestic flights is also relatively heavily weighted towards international passengers. 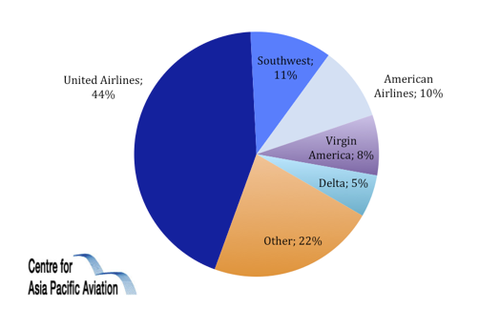 So, the loss of even some of United's international traffic both creates some problems and some opportunities (for others) internationally and beyond the gateway.

The ongoing weakness of United provides interesting fodder for speculation should the carrier again enter bankruptcy. But the global traveling public repeatedly ranks San Francisco and its environs as one of the world’s most sought-after destinations, so SFO will likely continue to grow.

Nonetheless, there will be a number of airlines - in the US and outside - who must have SFO plugged into their "potential" network plans, all the while watching United's fortunes very closely. LAX too will have more than a passing interest.