Ryanair led the declines yesterday, falling 8.3% - the most since 07-May-09 - in Dublin trading, after the airline narrowed its full-year net profit forecast to EUR200-250 million, lower than the previously guided EUR200-300 million. Europe’s largest LCC added that it would continue to discount average fares "precipitously" in coming months to stimulate demand and maintain high load factors. The carrier plans to reduce already-low average fares by 15-20% in the current July to September quarter, and by more than 20% in the full-year, further pressuring yields.

However, it is not all negative for the carrier, which reported a EUR136.5 million net profit in the quarter, a 550% year-on-year increase. The carrier continues with its ‘short term pain, long term gain’ strategy, and plans to continue to expand as its competitors scale back, positioning itself for future success on the upside. Mr O’Leary added, “we continue to see enormous opportunities to grow our business…Ryanair will be the only major European airline to deliver passenger and profit growth in the current year. The winners in a deep recession will always be those companies like Aldi, Lidl, McDonalds, and Ryanair who offer the lowest prices and the best service to consumers. We will continue to expand as others fail”.

Also in Europe, easyJet's shares fell 2.9%, despite European shares advancing to their highest close in more than eight month, while Air Berlin jumped 4.3%.

In the Middle East, AirArabia slipped 3.9%, the largest reduction since 13-Jul-09, with Emaar Financial Services stating the reduction is a result of a “knock-on effect” after Ryanair reported lower-than-expected financial results. AirArabia is scheduled to release its financial results early next month.

In the Indian market, SpiceJet shares gained 1.3%, after the carrier returned to profitability in the three months ended Jun-2009, with a USD5.5 million profit (compared to a USD26.8 million loss in the previous corresponding period), in what CEO, Sanjay Aggarwal, described as an “amazing result” in the current environment. Revenue increased 31.2% in the period. India's LCCs continue to garner market share in India, prompting a major response by incumbent full service airlines. 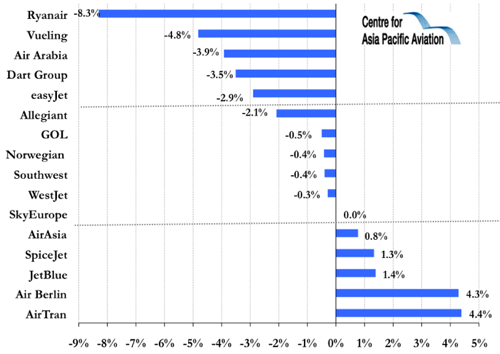