European carriers were mainly down on Wednesday (24-Mar-2010) despite a fall in oil prices (-1.6%), to USD80.61. Wider markets were flat, with a Fitch downgrade of Portugal’s sovereign debt being outweighed by gains in the pharmaceutical sector.

In key markets, France’s CAC (-0.1%) closed virtually flat. France's Leading Economic Index increased 0.8% in Jan-2010, "suggesting that the improvement in economic activity should continue in the near term", according to The Conference Board.

Germany’s DAX (+0.4%) meanwhile gained on news the country's Leading Economic Index increased 0.5% in Jan-2010, with the recent behaviour of the composite indexes "suggesting that economic activity will likely expand at a slow pace in the near term”. UK’s FTSE (+0.1%) was up marginally.

easyJet shares fell 1.0% yesterday, as the carrier announced the appointment of Carolyn McCall, current CEO of Guardian Media Group (since 2006), as the LCC’s next CEO. Also in Europe, shares in Air Berlin were down marginally (-0.1%), Jet2.com parent, Dart Group, slipped 1.5%, while Norwegian’s shares fell 1.0%.

Iberia (-0.3%) stated during trading that it would hold its end-of-month board meeting on 25-Mar-2010, creating speculation of an imminent announcement of a confirmed merger agreement with British Airways. The two carriers announced an MoU in Nov-2009, covering a merger which would create the world's third largest airline by revenue, and have subsequently commented that a merger agreement would be confirmed in 1Q2010. The main reason behind the delay relates to British Airways' multi-billion pound pension fund deficit.

Ryanair was flat after CEO, Michael O’Leary accused Air France (-0.7%) of suppressing growth at French regional airports, by blocking competition and forcing passengers through its Paris hubs. Air France recently filed a complaint with the European Commission against the LCC, accusing Ryanair of unfair trading practices, by requesting financial incentives from governments to open new routes. Mr O’Leary stated the complaint was merely a publicity stunt.

TNT shares up on rumours of plans to sell mail unit

Aer Lingus (+1.6%) and TNT (+1.5%) were up at the end of trading. TNT shares have been up on reports the freight carrier is planning to sell its mail unit. The carrier has since responded that the rumours are “interpretation”.

Europe Airline Daily reports the very latest in news from the European aviation industry. Other reports featured in today’s issue include: 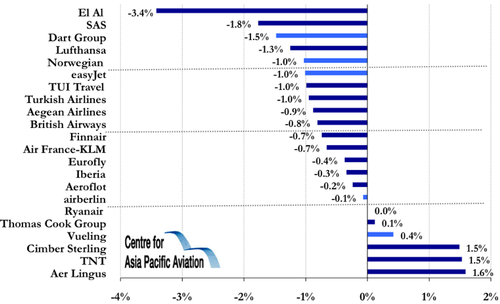