European LCC shares gained yesterday, as European shares advanced for a third consecutive day as the International Monetary Fund raised its global growth outlook to 4.6% for 2010, reflecting a stronger-than-expected first half.

Leading the gains was Jet2.com parent, Dart Group. Cimber Sterling was also stronger (+4.1%) following slumps of 4.5% and 9.1% in the previous two sessions, respectively.

Over these two days, the Danish LCC stated it expects to report losses of up to EUR11 million in FY2010/2011, with the carrier continuing to report yield weakness in May-2010. Cimber Sterling, on 07-Jul-2010, also announced that the owners of the group, the Nielsen family, had been partially released from its lock-up commitment and sold almost EUR170,000 worth of shares in the carrier to Karsten Ree Holding.

In the UK, shares in Ryanair gained 1.5% yesterday. The carrier has stated it plans to reduce capacity at Dublin Airport by 15% over winter 2010/2011, reducing the number of aircraft based at the airport from 14 to 12 and the number of services from approximately 1,000 per week to under 850 per week. The carrier has also previously announced plans to reduce capacity at London Stansed by 17% from Nov-2010, with an overall UK capacity reduction of 16% over the Winter.

See related article: End of an era: Ryanair continues shift away from UK/Ireland

The brokerage added that the carrier’s new aircraft must make more money than previously achieved if the carrier is to create shareholder value, adding that easyJet needs to deliver its GBP190 million cost reduction programme to plan, improve yields and recover asset utilisation to 2007 levels.

The brokerage added that the carrier’s share price, which currently stands around GBP4, is likely to fall, with the brokerage having a target price of GBP3.34. It added that pre-tax profit (PBT) per seat, normally around GBP3, needs to reach GBP5.80 in order to justfity the current share price. The carrier’s best ever PBT per seat was GBP5.34 in 2002. 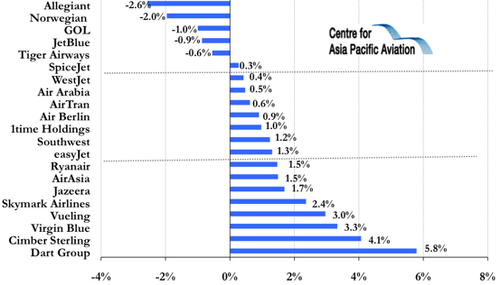