RwandAir will focus on route and fleet expansion in 2013, launching direct services to Accra, Douala and Juba coinciding with the delivery of new Boeing 737-700 aircraft and the introduction of a revised schedule at its congested Kigali hub.

RwandAir has reportedly recorded strong growth in recent years, including a 67% increase in passenger numbers in 2012 and increasing revenue by 60% compared to 2011 without increasing capacity.

The state-owned carrier’s CEO John Mirenga said in Jan-2013 that he was "hopeful" the airline will be profitable by 2015, at which time Rwanda's Government may consider selling down part of its holding in the carrier to private investors with a view to a possible stock exchange listing by 2020.

Mr Mirenga expects the airline will handle about 600,000 passengers in 2013, a 50% increase on 2012. The carrier does not expect to increase revenue by the same margin due to the pressure on fares.

The airline said in Nov-2012 it plans to expand its fleet from seven to 17 aircraft over the next five years and commence services to Europe and China in 2015.

Network expansion is scheduled to begin on 01-Jun-2013 with the introduction of services between Kigali and Accra, Ghana and Douala, Cameroon. Accra will be served direct five times weekly, Douala four time weekly via Brazzaville and Libreville. Both will be operated with Boeing two-class Boeing 737NG aircraft.

Juba in southern Sudan will be launched from 01-Jul-2013, three times weekly using a Bombardier CRJ900 and will further establish RwandAir as a growing force in Central Africa. Services to Zambia and Zanzibar have also been mooted for 2013.

RwandAir currently operates a network of 13 destinations covering central Africa as well as Johannesburg. The carrier also operates to Dubai, its sole destination outside of the continent. RwandAir’s single domestic route is between Kigali and Cyangugu. 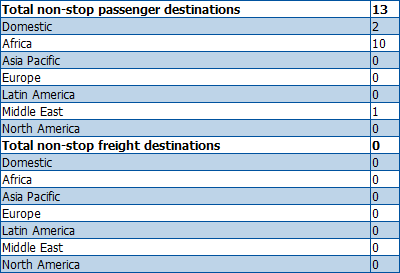 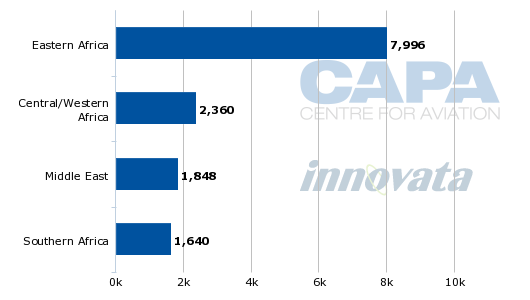 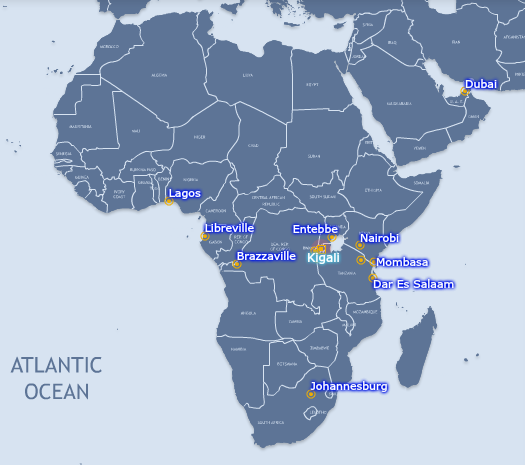 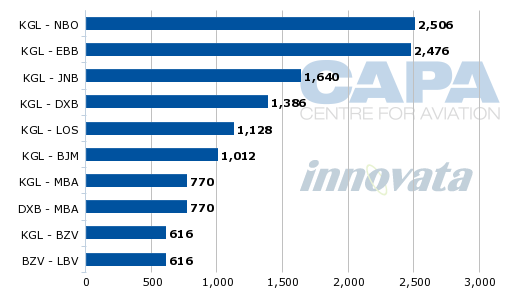 RwandAir has a monopoly on eight of its 13 routes, including Brazzaville, Libreville, Lagos, Kamembe, Kilimanjaro, Dar es Salaam, Dubai and Mombasa.

The airline competes with Kenya Airways on Kigali-Nairobi. Kenya Airways will nearly triple its capacity on the route from the airline’s current low point of about 530 one-way seats from 17-Jun-2013 to about 1,540 seats in Jul-2013. 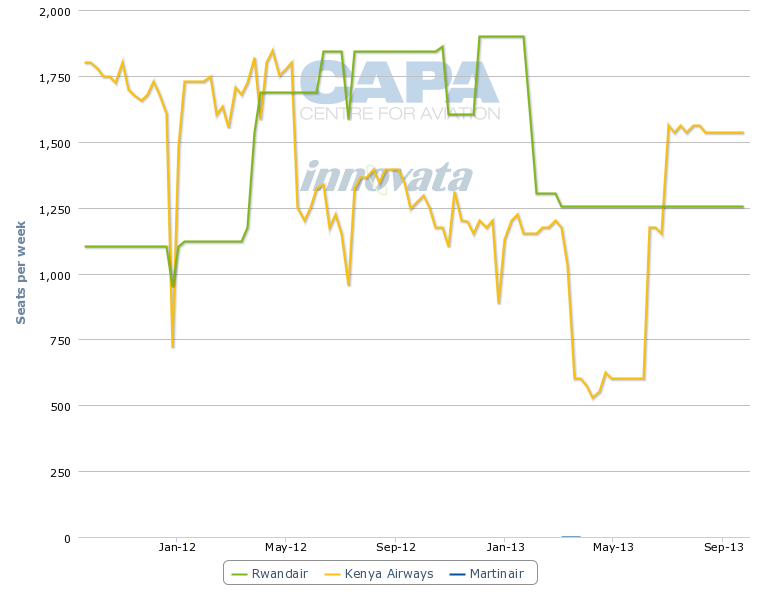 RwandAir and Kenya Airways are finalising a strategic partnership agreement

RwandAir and Kenya Airways announced in Dec-2012 their intent to form a strategic partnership under which the carriers would offer better connectivity to Kenya Airways’ onward network at its Nairobi hub.

The collaboration promised to extend to cargo, maintenance and flight training. The carriers were still finalising details of the agreement.

Kigali-Entebbe will go from being one of RwandAir’s most competitive route to a duopoly with Air Uganda, after Ethiopian withdraws its daily 737-800 service on 15-Jun-2013. Ethiopian operated the route as an extension of its Addis Ababa-Entebbe service. Qatar Airways also pulled off the route in Nov-2012 after just eight months. 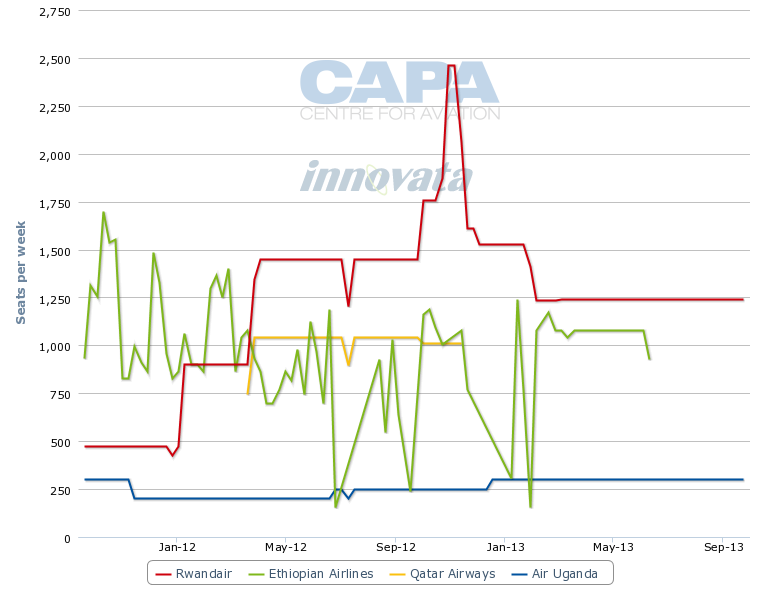 Kigali-Bujumbura is RwandAir most competitive route

Kenya Airways dominates the route offering about 1,300 one-way seats per week as an extension of some of its Nairobi-Kigali service and accounting for 58% of total capacity on the route against RwandAir’s 23% share. But Kenya Airways will collapse its offering less than 300 one-way seats per week from 01-Jul-2013, according to Innovata, at which point Ethiopian takes the lead with a near 41% capacity share when it rebuilds its capacity to about 830 seats per week against RwandAir’s approximately 500 seats. 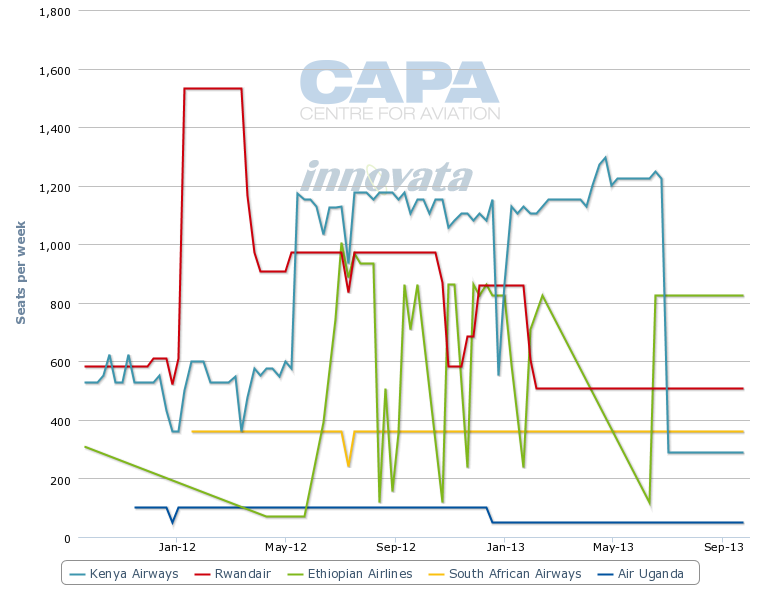 Kenya Airways’ capacity pull down ends a period during which total capacity on the route peaked at nearly 3,600 one-way seats, roughly tripling capacity over just seven months from Dec-2011. 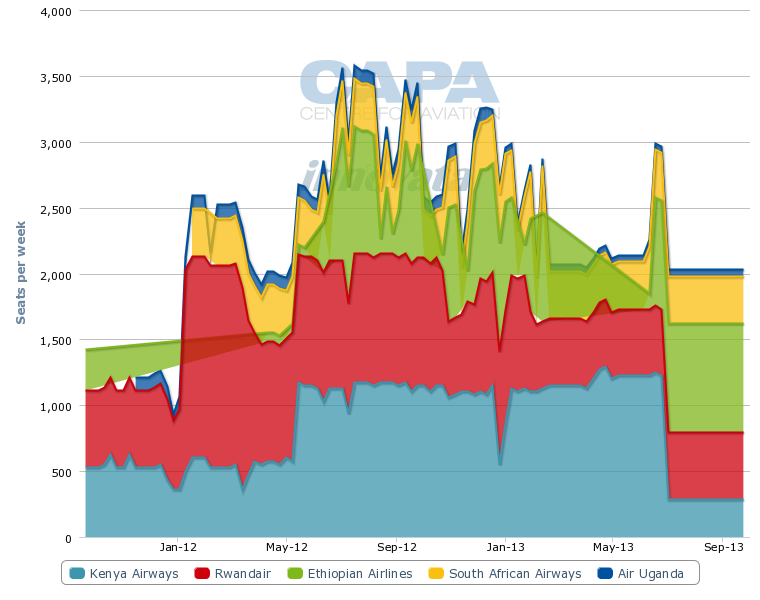 RwandAir expects to take delivery of one Boeing 737-700 in a two-class, 120-seat configuration in Apr-2013 and a second in May-2013. The aircraft will replace two 737-500s and along with the revised schedules are expected to improve network efficiency and grow passenger numbers and revenue.

The carrier took delivery of two new CRJ900 NextGen regional jets in Oct-2012, replacing two smaller CRJ200s. The carrier has options for a further two CRJ900s. It also has a Dash 8-200 turboprop in its fleet.

Note: in storage aircraft reflects the 737-700 delivered earlier this month that has not yet been placed into service
Source: CAPA Fleet Database

Rwanda signed an aviation treaty with the Netherlands on 06-Feb-2013 formalising a cooperative relationship that has been running for a few years.

KLM operates daily from Amsterdam to Kigali returning via Entebbe offering about 2,000 one-way seats per week. But the deal allows RwandAir to operate to Amsterdam. A commencement date for such services has not been disclosed and RwandAir does not have an aircraft in its current fleet with the range to make the 3,500nm journey direct.

Rwanda is keen to leverage its central Africa location to establish itself as a hub for trans-Africa traffic. RwandAir CEO John Mirenge told Routes Online that a new schedule “allows us to expand, add new destinations and develops our airline at Kigali airport as a transit hub”.

Rwanda’s Government reportedly approved, in Feb-2013, an 11.9% increase in the national budget to RWF1.55 trillion (USD2.4 billion) in part to provide additional funding for RwandAir.

Construction of a new national gateway airport, Bugesera International Airport, 25kn south of Kigali is still on the drawing board with expression of interest to construct the USD635 million first phase of the project closing in Apr-2013.

Kigali International Airport is being expanded ahead of possible replacement

Expansion of Kigali International Airport commenced in Sep-2012 to ease congestion at the airport. The RWF12 billion (USD18.9 million) three phase project expand the arrival and departure terminals, to accommodate the increasing number of passengers.

The aprons will also be enlarged to increase aircraft parking space from seven to about 13.

Kigali airport was originally designed to cope with 20,000 passengers per day, but an influx of foreign carriers serving the country has seen that number double to 40,000 per day. 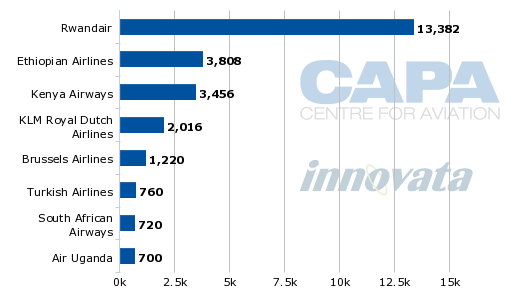 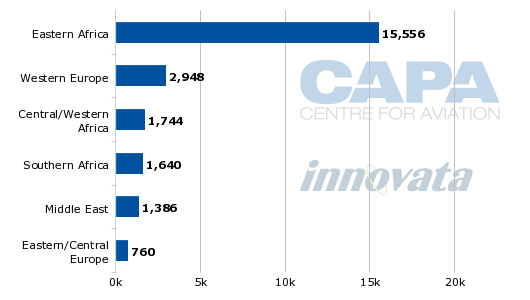 RwandAir has demonstrated consistent and considered growth since being founded in 2002 as the new national carrier.

The carrier has forged sound links with regional carriers in particular Kenya Airways which also owns 41% of Precision Air. Kenya Airways in turn has Dutch national carrier KLM as a cornerstone shareholder which sees significant growth opportunities on the continent.

Rwanda has been recognised for its significant economic progress following the 1994 genocide and while the land-locked country still faces many challenges, including a lack of land-based transport access, its national carrier continues to be a central African airline to watch.