Russia’s Yamal Airlines has been transforming its operations over the past year with significant network development and fleet modernisation and expansion. The airline transported 912,000 passengers in 2012 and is aiming to increase its passenger traffic to 1.5 million in 2013.

Yamal is currently Russia’s 10th largest carrier overall with 42,500 total weekly seats on offer, according to CAPA and Innovata data. Domestically it is the seventh largest carrier in Russia with around 38,500 weekly domestic seats offered.

Yamal’s recent route development has focused on links between larger centres while its fleet modernisation is seeing it introduce larger and more modern A320 family equipment. The airline has also been expanding its network reach through the signing of codeshare agreements with VIM Avia and S7 Airlines in late 2012.

The carrier is based at Salekhard Airport in northern Russia though it also operates hubs at Moscow Domodedovo Airport and Tyumen Roshchino Airport. Overall it operates to 24 destinations in Russia and five international destinations, according to Innovata data. For the week commencing 19-Aug-2013 Yamal is offering around 38,500 domestic seats and around 4,000 international seats (approximately 90% and 10% of itscapacity, respectively).

Yamal’s network has continued to expand in 2013 with four new domestic routes between the key centres of Moscow, Saint Petersburg and Tyumen. The airline also recently expanded its international network with the launch of Moscow Domodedovo-Odessa service, its second to the Ukraine and sixth international route overall.

The carrier faces competition on all its new routes except for Novosibirsk-Tyumen.

Yamal Airlines modernising its fleet and expanding its capacity

Yamal commenced the modernisation of its fleet in 2012. In 2H2012 Yamal expanded its A320 fleet from three to seven aircraft with two A320s leased from Sep-2012 and three more A320s purchased in the latter half of the year. The airline also announced in Nov-2012 plans to withdraw its Antonov An-24 aircraft from its fleet in 2013, replacing them with Let L-410 turboprops.

Yamal has continued to pursue fleet and capacity expansion in 2013. In Jul-2013 Yamal signed a LOI with GTLK for the lease of four A321s and two Bombardier CRJ200s.

According to CAPA’s Fleet Database, Yamal now operates a fleet of 26 aircraft on commercial services, including A320s, Boeing 737-400s, 737-500s, CRJ200s and L-410s. The airline’s only non-western built aircraft is the Czech-built regional 18-seat L-410. It also operates a Bombardier Challenger 850 business jet.

Yamal operates its larger Airbus, Boeing and Bombardier equipment from Moscow Domodedovo and Tyumen while Salekhard also sees these larger aircraft types in addition to its regional L-410 fleet. The L-410 aircraft are also operated from Nadym, Novy Urengoy and Tarko-Sale.

Compared to a year ago, Yamal has increased its domestic capacity at its three main airports by 25% at Moscow Domodedovo, by 32% at Salekhard and by 52% at Tyumen, according to CAPA and Innovata data. 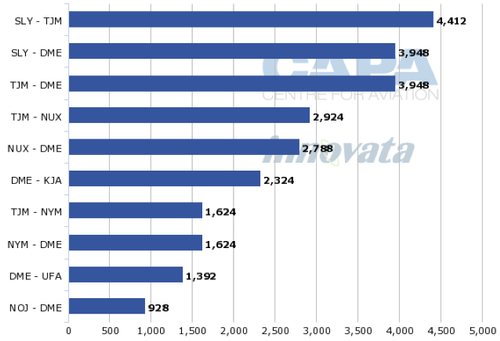 Of Yamal’s top 10 domestic routes above, it currently faces direct competition on six of them and often from larger Russian carriers. The routes it is currently the sole operator of include Tyumen to Salekhard and Nadym, and Moscow Domodedovo to Nadym and Noyabrsk. Indirectly Yamal competes with Gazpromavia on Moscow-Nadym however Gazpromavia operates from Moscow Vnukovo Airport. Yamal Airlines also indirectly competes with UTair on Moscow-Noyabrsk service with UTair also operating from Moscow Vnukovo.

While Yamal operates a considerable number of domestic services across western Russia, its international network is relatively small with only six regular scheduled routes from Russia to destinations in Eastern/Central Europe: Yerevan (Armenia). Podgorica and Tivat (Montenegro) and Kiev Boryspil and Odessa (Ukraine). Over 75% of the airline’s international seat capacity is currently operated on Montenegrin routes. 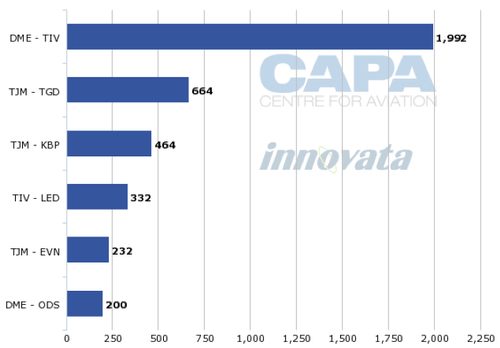 Yamal is currently the sole operator on its international services from Tyumen to Podgorica, Kiev Boryspil and Yerevan. Podgorica service is seasonal while the services to Kiev Boryspil and Yerevan are year-round. Yamal also operates seasonal service from Tyume to Thessaloniki in Greece (this route is not listed among its current six international routes as Yamal is not scheduled to operate any flights to Thessaloniki in the current week, according to Innovata data). 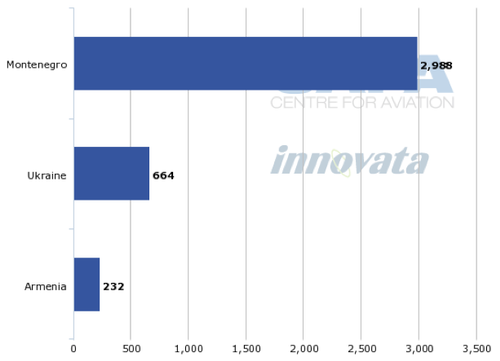 Further capacity increases and expansion likely with A321 aircraft

Once larger capacity A321 are delivered, Yamal’s existing Russian network will see capacity increases while new routes could potentially be launched. The A321 does not provide the airline with any improved range capability so it will still be restricted to short and medium haul routes. The A321 will most likely be used to increase capacity on the carrier’s domestic trunk routes, freeing up smaller aircraft for increased frequencies on existing routes and/or new routes.

The additional A320 aircraft will also support further expansion of Yamal’s operations. While the airline’s international focus currently is small, this may change in the future with the modernisation and development of its fleet which would enable it to expand its presence in Central and Eastern Europe.

Yamal’s operations also stand to improve in efficiency with the modernisation of its fleet enabling it to operate a more fuel-efficient and standardised fleet. While for now it will still operate aircraft from four manufacturers (Airbus, Boeing, Bombardier and Let), presumably its 737 Classics will eventually be replaced by an expanded Airbus fleet, leaving it operating Bombardier and Let aircraft on smaller regional routes.

Yamal is one of several smaller Russian carriers that are well positioned to benefit from the continued growth of the Russian market. The recent modernisation and expansion of its fleet is just one phase in the carrier’s ongoing development.