Russian regional airline RusLine is pursuing significant expansion in summer 2013, including the launch of five routes from Chelyabinsk Airport.

But RusLine’s capacity will nearly double over the next couple of months as it launches several routes, including from Chelyabinsk and a new base at Voronezh, and adds capacity in several existing markets. The carrier plans to offer almost 20,000 weekly domestic seats in the Russian domestic market in Jul-2013, giving it almost a 2% share.

The airline was originally established in 1999 as Aerotex Airlines and was based at Moscow Sheremetyevo Airport. The airline later rebranded as RusLine and relocated its base to Moscow Domodedovo Airport. In 2010 RusLine acquired the brand and assets of Air Volga which had entered bankruptcy. This included six Bombardier CRJ200 regional jets.

From its base at Moscow Domodedovo, where it operates 13 domestic routes, RusLine faces direct competition on only two of these. Internationally only its service to Aktyubinsk faces competition.

According to the CAPA Fleet Database, RusLine currently operates a fleet of 20 aircraft, including 14 CRJ100/200s (six CRJ100s and eight CRJ200s). The airline also operates two A319s, three Embraer EMB120 turboprops and one Tupolev Tu-134. The airline currently does not have any aircraft on order.

RusLine is one of several small Russian carriers that have been expanding rapidly. Many of these carriers are expanding and modernising their fleets using Bombardier CRJs, particularly the 50-seat CRJ200, as regional carriers in the US rapidly phases the type out.

While a fairly expensive aircraft to operate, the Russian carriers have been able to acquire CRJ100/200s relatively inexpensively. Therefore the low asset cost seems to justify their somewhat expensive operating costs, particularly fuel costs. The Russian regional market also has been growing rapidly and has relatively high yields, driven by strong demand from business passengers and a lack of low-cost carriers. But many of the routes are not yet thick enough for large regional jets or narrowbody aircraft, making them ideal for the 50-set regional jets being phased out by US carriers.

Ak Bars Aero, IrAero, RusLine, Severstal Aircompany, UTair Aviation and Yamal Airlines are the current Russian operators of CRJ aircraft, with approximately 54 in service, according to the CAPA Fleet Database. All these carriers focus on domestic routes in Russia but they also each operate at least one international route.

The largest of these carriers is UTair Aviation, which is Russia’s fourth largest carrier overall and accounts for about 7% of total capacity in the Russian market.

RusLine’s new routes from Chelyabinsk Airport will be to the five Russian destinations of Krasnodar, Novy Urengoy, Gelendzhik, Novosibirsk and Mineralnye Vody. Only Chelyabinsk-Novosibirsk is already operated by another carrier, Ak Bars Aero, which operates three times weekly on the route, also using CRJ200s

Two of the new routes have already launched with the other three launching over the next month.

RusLine’s initial two routes from Chelyabinsk have seen it become the eighth largest domestic carrier from the airport, behind major Russian carriers such as Aeroflot, S7 Airlines and UTair. The airline’s current 200 weekly seats on offer equate to around 1% of domestic capacity available at the airport, according to CAPA and Innovata data.

During the height of the summer season RusLine will offer up to 1,000 weekly seats from Chelyabinsk with its capacity share increasing to almost 3%. 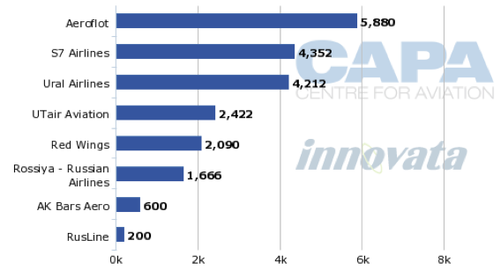 RusLine selects Voronezh as fifth base

RusLine also plans to establish a base in Jun-2013 at Russia's Voronezh Airport, where it will base some Bombardier CRJ200s. This will be the airline’s fifth base after Moscow Domodedovo, Saint Petersburg, Volgograd, and Yekaterinburg.

The airline’s only service from Voronezh currently is to Moscow Domodedovo. The carrier will launch service to Saint Petersburg in early Jun-2013. The airline’s bases will all see expansion in summer 2013 with the resumption of many seasonal services.

RusLine’s international network will also expand during summer 2013. The airline will launch two new services to Lithuania in mid Jun-2013, from Moscow Domodedovo to Kaunas and Palanga. Both services will operate twice weekly.

The Russian Federal Air Transport Agency (Rosaviatsia) also recently assigned RusLine to four new international routes, including services from Sochi to Athens and Thessaloniki, and from Mineralnye Vody to Aktau and Munich. Mineralnye Vody-Aktau is the only route currently served by another carrier. Kazakhstan’s SCAT Airlines currently operates twice weekly on the route.

Aktau service would be RusLine’s second route to Kazakhstan after Moscow Domodedovo-Aktobe service. SCAT also competes on this route.

RusLine is also expanding its charter programme in summer 2013 with charters across Europe and to India. In Apr-2013 the airline launched charter service from Krasnodar to Brussels Charleroi. Charter services to Sharjah and Tel Aviv will launch during summer 2013.

RusLine also launched a charter programme to India in Apr-2013 with services from Krasnodar, Rostov and Samara to Goa. The airline uses its A319 and CRJ200 aircraft for charter operations.

RusLine’s network will continue to expand over the coming months, if it launches more international services using its recently acquired rights from Rosaviatsia. The airline’s network should not be threatened with the potential upcoming launch of low-cost operators in Russia due to its network largely being regional in nature.

There are huge opportunities for growth in the Russian regional market, both domestically and in short-haul international markets to other CIS countries such as Kazakhstan, where there is surging demand. RusLine and other regional carriers have successfully carved out niches in the fast-growing and dynamic Russian market and are poised to continue to expand rapidly.