Royal Jordanian (+0.6%) President and CEO Hussein Dabbas stated it expects to receive its first B787 in Sep-2013 with four more to arrive by 2014. Further deliveries will be made from 2015. The carrier has 11 B787 orders. Mr Dabbas also stated the carrier will make a "decent profit" in 2010 despite a 37% increase in fuel costs

Mr Dabbas also announced the carrier is planning further expansion into the African market in 2011 with Nigeria the first route under consideration. Royal Jordanian launches about two routes per year, with plans already in place to launch service to Berlin in Jun-2011. The carrier is looking at Lagos as its second destination, but added: "If it doesn’t work for Lagos we will look at another African destination." 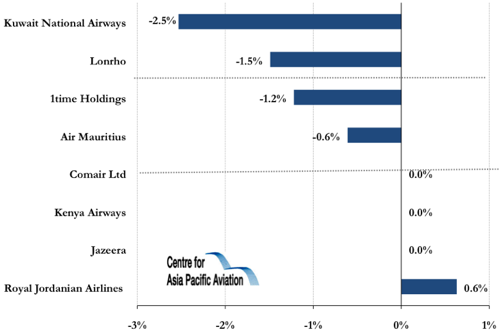