The carrier expected 2010 to be "challenging", despite initial signs of improvement. RJ stated increasing revenues, controlling costs and carefully matching capacity to demand are the keys for the airline.

Also in the Middle East, Jazeera Airways (+1.9%) and Kuwait National Airways (+1.9%) were also up. The Kuwait Share Index has been on the rise since Friday, after Credit Suisse upgraded the index’s shares from ‘Underweight’ to ‘Neutral’, in response the Kuwaiti Government’s spending plan to boost economic development and lower borrowing costs. The government plans to increase spending by approximately 34% in the 12 months commencing 01-Apr-2010. 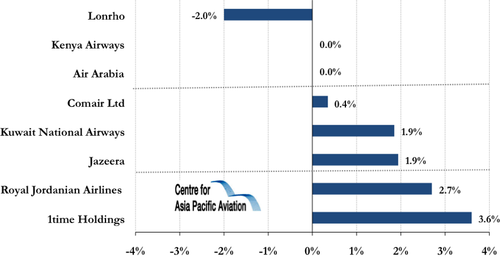