Royal Jordanian (+1.9%) and Boeing signed an order for three B787-8s. The order is valued at approximately USD500 million at list prices. This order previously was attributed to an unidentified customer on Boeing's Orders and Deliveries website. With direct purchases and leases combined, Royal Jordanian has committed to 11 B787-8s. The Middle East carrier placed its first orders for four B787s in 2007 and also has arranged to lease two aircraft each from CIT Aerospace and International Lease Finance Co.

Kenya's Tourism Minister, Najib Balala stated the country will see 1.2 million arrivals in 2010 if the current momentum is maintained. He stated Kenya could see 2 million visitors in 2012 depending on the country's political stability at the time. Emerging markets that the Ministry of Tourism, through the country's marketing agent, Kenya Tourist Board (KTB), is targeting include the Eastern Europe block, Russia, Middle East and China. The minister, however, expressed concerns over inadequate funds allocated to the ministry for marketing in the national budget. 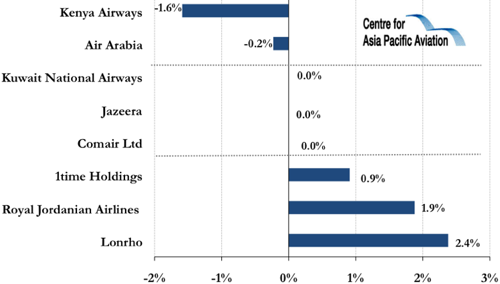